The 17th hole at TPC Sawgrass was turned into a waterslide by fans who were stuck for hours waiting to watch some golf. 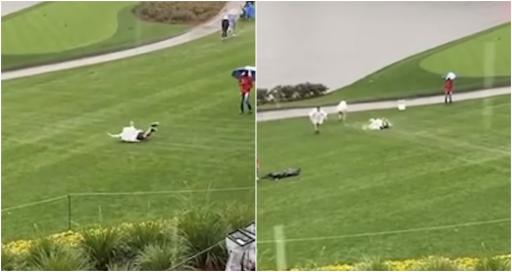 The 2022 Players Championship was hit with heavy rain over the first two days' play - but nothing dampened the spectators' spirits.

Justin Thomas had the chance to spend some time with his beloved dog Frank while Rory McIlroy had a rare afternoon off with his daughter.

Despite the prospect of absolutely no golf being played on Friday afternoon, the fans still stayed at TPC Sawgrass.

They crowded round the iconic 17th green and displayed great spirit despite the weather. Then things turned comical.

Golf fans have already pointed out the hilarity of the gold figure animiation hitting shots in the broadcast. But this was something else.

They turned an area in front of the 17th green into a waterslide. The Instagram account @arut128 captured all the hilarity.

The Players Championship did not finish on Sunday as planned. Instead, they were faced with the prospect of playing on until Monday.

Who is this guy and where did he get a gold squeegee pic.twitter.com/mqEYllCdXd