Collin Morikawa misreads a putt SO BADLY he perplexes commentators

Collin Morikawa might want to forget this putt at the Sentry Tournament of Champions, but in fairness he was 81 feet away. 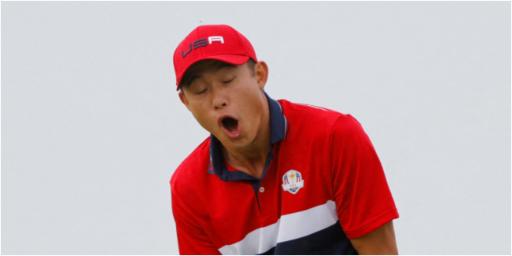 Collin Morikawa might want to forget this putt on the PGA Tour.

In all fairness to the 24-year-old phenom, he was 81 feet away with this effort at the Sentry Tournament of Champions.

But to say this putt was a misread is an understatement.

It left him with 21 feet to save par on the 8th hole during his third round.

Related: Collin Morikawa was so nervous about proposing to Katherine Zhu

Related: Collin Morikawa did something he has never done before at Zozo

Tried to use the slope and feed it to the hole on the birdie try... and missed the slope. Ouch.

I thought Collin was supposed to be a boring golfer? Run that PIP money this year #rocketarm #Co11in pic.twitter.com/MMuUH2kxT9

The Plantation Course is not a tricky place for these players to score generally.

Indeed, the scoring average in the third round was 67.

And Justin Thomas shot a new course record of 61 which was later equalled by Jon Rahm.

Yet these players are without their green-reading books.

Instead, they will have to make do with PGA Tour-approved yardage books.

Perhaps Morikawa needed one for this.

Related: How much is Collin Morikawa worth?

Even the commentators were confused by this effort.

"You might see that twice a year," another added.

Morikawa lagged his effort up to a few inches and tapped in for a bogey four.

TaylorMade staffer Morikawa has shot rounds of 67, 70 and 68 to leave him at 14-under par going into the final round.

He trails the leaders by more than 10 shots and will likely have to wait until he can be crowned the world's best golfer.

Morikawa had the chanced to become the number one in the official rankings at the Hero World Challenge.

But he blew a five-shot lead on the final round with some rather dubious shots that included straight-up hosel rockets.

Norwegian Viktor Hovland cantered to the front and rained on his parade.

Morikawa is using the new TaylorMade STEALTH driver this week and has claimed he has gained in ball speed in distance.