Justin Thomas was in blistering form during the third round of the Sentry Tournament of Champions and it reminded him of a time he was nine years old and beat a record previously held by Woods. 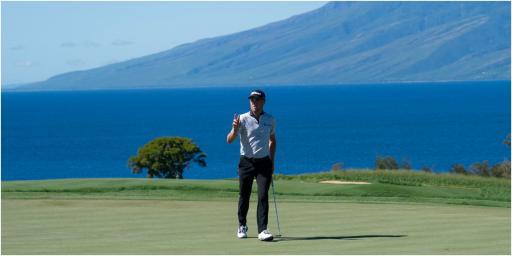 Justin Thomas reportedly shot a 61 in a practice round in Kapalua but made it official at the Sentry Tournament of Champions.

Thomas made a sublime eight birdies and two eagles on his way to the course record in the blistering heat in Hawaii.

Jon Rahm rained on his parade and matched it a short while later who will battle Australia's Cam Smith for the title.

Thomas spoke to the media after his sensational third round and admitted if there was such thing as an "easy 61" then this was it.

Golf stat man Justin Ray was on hand to dissect Thomas's round even further.

It appears that Thomas is only the sixth player to have improved his score by six or more shots every day.

Brice Garnett reportedly was the last to do this at the 2020 American Express:

Over the last 10 PGA Tour seasons, this is just the 6th time a player has improved his score over the previous day by 6+ shots in both round 2 and round 3.

Thomas also discussed his fine round with the media afterwards, and said:

"I didn't do anything crazy, just took advantage of all the easy opportunities.

"I had and hit a lot of really good drives, quality iron shots and wedges in there to, again, if there's such a thing as an easy 12-under, I definitely felt like it was.

"I wasn't crazy aggressive today. When you have wedges in your hand with soft greens you attack.

"It doesn't matter if you're in last or first. You're just trying to make birdies and I felt like that's what I did."

Thomas told the press about the first time he broke a course record in a junior competition when he was nine years old.

Which record did he beat?

None other than his pal Tiger Woods.

Thomas said of the record:

"I just remember because Tiger had the course record, and I remember beating him, and it was like the coolest thing obviously I had ever done at that time.

"Something tells me it's not still standing. But I know I was - that was the first one I had ever broken, and I was pretty pumped about that."

Thomas is in all likelihood too far back to seriously mount a challenge.

But the signs are looking good for Thomas, who will look to improve upon what he would consider a poor 2021.