Jack Nicklaus is STILL CURIOUS about his first ever pay cheque

Jack Nicklaus received his first ever pay cheque from the PGA Tour 60 years ago this week, but one thing still bugs him. 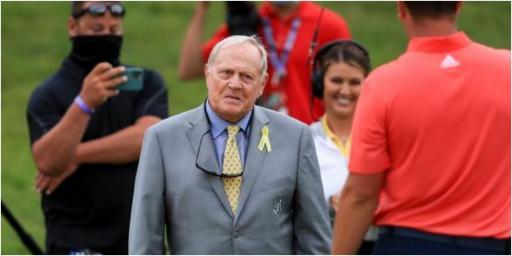 But after 60 years famed golfer Nicklaus still is curious about one thing on the anniversary this week.

Who got that extra penny?

An image of the cheque was shared by a Golf Channel journalist.

Related: Jack Nicklaus has a bold claim about another Tiger win

The money is a far-cry from the sums of money that players are competing for these days.

Though it has to be said, when was the last time you heard Jim Nantz mention how much a putt is worth?

There are still a few purists out there.

On this day 60 years ago, Jack Nicklaus earns his first PGA Tour check...

Nicklaus, 81, saw the post and took the time to comment on it, writing: "I still wonder who got the extra penny."

Only a year later the Golden Bear won the Masters for the first time and then went on to win five more green jackets.

This week Nicklaus spoke about how if - hypothetically - Woods were to win the Masters again it would eclipse his achievements.

It would still leave Woods, 46, two behind Nicklaus' haul of 18 majors.

But after all Woods has been through, Nicklaus believes it would make the big cat the greatest there has ever been.

Quite a claim from the GOAT himself.

I still wonder who got the extra penny. https://t.co/yGj78EKgQi