WATCH: Rory McIlroy gets emotional as daughter Poppy tells him he's No.1

Rory McIlroy got a congratulatory message from his daughter Poppy after winning his 21st PGA Tour event in Canada. 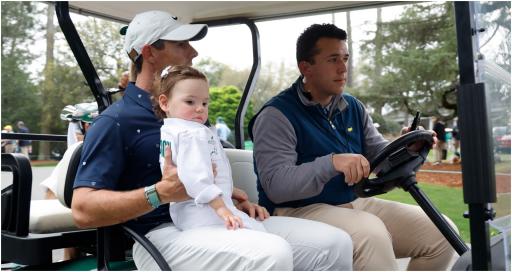 Rory McIlroy got emotional as he was given a congratulatory message from his daughter Poppy after he defended his title at the RBC Canadian Open.

It was the first time that McIlroy managed to defend a PGA Tour title. It seems odd, considering he's been a playing professional for more than a decade now and he now has 21 wins.

McIlroy put on a masterclass at St. George's to fend off Justin Thomas, Tony Finau and bright young talent Sam Burns in what we could all look back on in a defining week of golf.

Northern Irishman McIlroy, 33, admitted that he had "extra incentive" to win this week after the polarising, Saudi-backed LIV Golf Invitational Series finally got off the ground.

Of course, that series is fronted by former Open champion and 20-time PGA Tour winner Greg Norman. McIlroy's victory on 12 June meant he has now leapt ahead of the Shark in career wins.

"One more than Norman," McIlroy said in the opening line of his press conference.

McIlroy was asked if the win felt of greater significance considering the landscape of professional golf.

He said: "I guess time will tell. It feels really good with all the things that were going on in the world of golf this week.

"For the Canadian Open, a national championship, to have a week like it's had, three of the best players in the world going at it down the stretch, trying to win in front of those crowds and that atmosphere.

"That's what I talked about last week at Memorial, talking about a proper golf tournament. Like that was just, that's as top notch as you're going to get. It was a pleasure to be a part of and I'll look back on this week and this, especially today, with very, very fond memories.

"In terms of what it means for legacy, I don't know, but I just know it feels really good to win this week of all weeks."

McIlroy was also asked what we don't see immediately after victories.

"Yeah, so I'll go straight to the locker room, get all my stuff packed up if it isn't already," he said. "[I will ] give the locker room staff a nice generous tip for all their help this week. And then get going to the airport.

"My wife [Erica Stoll] and daughter are already on the plane, so she's probably trying to keep her entertained before I get there.

"And then just get on the flight, go to Boston. Land. I mean, yeah, it's not really that -- I mean, if I'm feeling up to it, once I get to the house that we're renting in Boston I might afford myself a glass of wine or two to celebrate.

"I gave Shane Lowry a ride from Jupiter up to Columbus last week and he brought me a really nice bottle of wine. So that's been with us. So maybe open that, if I'm not feeling too tired."

McIlroy even managed to get a congratulatory message from his daughter Poppy before he made his way to the airport.

Next page: How much Rory McIlroy won at the RBC Canadian Open