Scottie Scheffler could become World No.1 with a win at the WGC Match Play after beating Seamus Power 3&2 in the quarter-final. 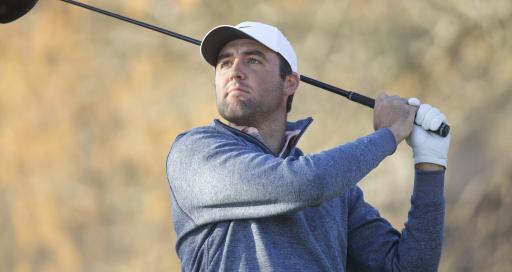 Scottie Scheffler is on course to become World No.1 after beating Seamus Power 3&2 in the quarter-final of the WGC Match Play.

Scheffler beat Billy Horschel in the last-16 on Saturday and he faced off against Power who had beaten Tyrrell Hatton convincingly in the previous round at Austin Country Club.

The American, who has recently won the WM Phoenix Open and the Arnold Palmer Invitational, took a 2 up lead after seven holes but the Irishman fought back to tie things up at the turn.

Walking off the 13th green, Scheffler was 2 up and on the par-5 16th hole, he chipped in for an eagle to seal the match. He set up a semi-final tie with Dustin Johnson and he could become World No.1 if he wins the event in Texas.

It is fair to say that Johnson, the 2017 WGC Match Play champion, is in great form. He went 2 down to Ryder Cup teammate Brooks Koepka after six holes but by hole 11, things were all square.

A walk-off chip-in to advance to the semifinals

The former World No.1 went 1 up for the first time on the 15th hole and he wrapped things up with a birdie on the 18th hole to win 2 up.

After completing an amazing turnaround earlier in the day against Adam Scott, Kevin Kisner beat Will Zalatoris 4&3 in a match he led from the 1st hole.

The 2019 WGC Match Play champion was 3 up at the turn and 5 up with six holes left. Zalatoris, who needed four extra holes to beat Kevin Na in the last-16, only won two holes and he finally succumbed on the 15th hole.

Kisner will face Corey Conners in the semi-final on Sunday. Conners was never down in his quarter-final tie with Abraham Ancer, the Mexican who beat Collin Morikawa 7&6 in the last-16.