Kevin Na lost in a four-hole playoff to Will Zalatoris in the last-16 of the WGC Match Play at Austin Country Club on Saturday. 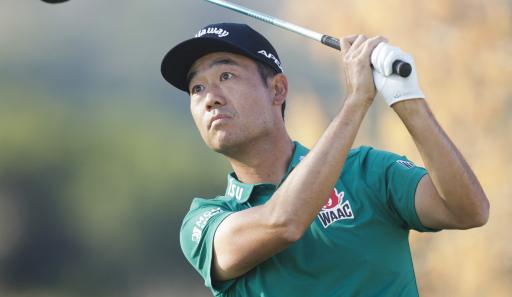 Kevin Na appeared to wear a green shirt with the Golf Saudi symbol during his match with Will Zalatoris in the last-16 of the WGC Match Play.

Unfortunately for the five-time PGA Tour winner, he lost to his youthful opponent after 22 holes. Na was 1 up heading into the final hole of regulation play before Zalatoris birdied the 18th to make it all square.

Each player parred the first three playoff holes, but Zalatoris birdied the driveable par-4 13th hole which was the fourth playoff hole of the tie.

During their match at Austin Country Club, one golf fan observed that the Golf Saudi symbol was on the collar of Na's shirt.

This was a very intriguing observation and one that has come shortly after the announcement of the LIV Golf Invitational Series, the identity of the Saudi golf league.

@NoLayingUp @TronCarterNLU @AndyTFE @BrendanPorath I might have just never noticed before but is that the Golf Saudi logo on Na’s collar? Going all in with Kokrak? pic.twitter.com/OASWwHkJOH

The LIV Golf Invitational Series, commissioned by Greg Norman, will be a schedule of eight events and it will begin at the Centurion Club in the UK in June.

It was revealed on Thursday that Norman sent invitations out to various PGA Tour players to participate in the LIV Golf Invitational Series.

The new rival tour has launched despite many of the world's top players pledging their loyalty to the PGA Tour. Phil Mickelson is now taking time away from his career due to his collusion with the Saudis.

Having seen the Golf Saudi symbol on Kevin Na's collar, it will be interesting to see if the 38-year-old takes part in the new series this summer.