Kevin Kisner now boasts an incredible record at the WGC Match Play but this stat shows how remarkable his comeback victory over Adam Scott truly was. 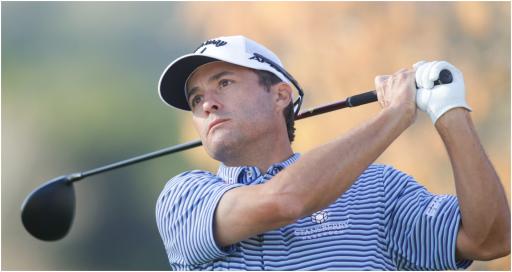 Kevin Kisner had the perfect response when he was asked his secret to succeeding in match play.

"I don't have the most firepower but never give a hole away is kind of my MO, and that's what I love about this golf course is I can chase the ball out there in the fairways and hole a few putts."

Suffice to say it has worked out for Kisner at the WGC Match Play in Austin Country Club.

Kisner won his group by seeing off Justin Thomas, Luke List and Marc Leishman in some spectacular matches.

There were hole outs from the sand, there were mesmerizing putts from down town. Just ask him if he thinks this game is a hobby.

Then he beat Adam Scott and also took care of the last season's rookie of the year Will Zalatoris.

Kisner's exploits have taken him to a record of 20-6-1 since the tournament moved here.

If you haven't been able to keep up, Kisner actually found himself 3 down after 14 holes against Scott. But then he went on to win.

Golf stat guru Justin Ray shows us just how incredible that was:

Kevin Kisner was 3 down through 14, now all square with Adam Scott.

Kisner was due to play Canada's Corey Conners in the semi final. Conners beat Takumi Kanaya in the round of 16 before beating Abraham Ancer to set up a showdown with Kisner.

After reaching the last four, Kisner was asked if he feels he should be on every Ryder Cup and Presidents Cup team.

"Well, it depends on where we're playing. I say it all the time, if we're playing at Bethpage [Black], you can leave me at home," he said.

True to form, Kisner had to be told he was playing Conners in the semi final.

He told the media he before Saturday's play he asked Brooks Koepka in the locker room if they were playing each other.

"I got DJ," Koepka reportedly said.

Kisner said Conners "stripes the hell out of it" so he'll need to have his A game.

True to form, Kisner knows exactly what his game plan will be: "All I'll try to do is annoy him with my putter."