Tiger Woods cried as he was officially inducted into the World Golf Hall of Fame after a moving speech from his daughter Sam. 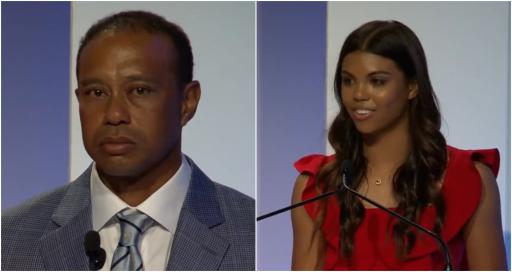 A tearful Tiger Woods was officially inducted into the World Golf Hall of Fame after his daughter Sam gave a moving speech.

Woods' daughter Sam described his car crash as one of his "ultimate lows" and one of the scariest moments of their family's life.

She said she did not know whether her father would come home in one piece. "Now you are here standing on your own two feet," she said.

Sam added: "This is why you deserve this. You defied the odds every time. Because you are a figher.

"Being the first black and Asian golfer to win a major. Being able to win your fifth Masters after multiple back surgeries.

"And being able to walk just a few months after your crash." She said "through thick and thin" their family will always be a team.

More: A history of Tiger's feud with Sergio Garcia

Woods took to the stage, hugged his daughter and posed for photographs looking visibly moved.

In his speech, he paid tribute to his father Earl and the impact he had on his life.

He also confirmed that his son Charlie was named after the late Charlie Sifford, who was the first African American to play on the PGA Tour.

Woods teared up again as he said without the sacrifices of his parents they wouldn't have instilled his work ethic.

Woods paid tribute to the fact that they took out a second mortage on their home so he could compete at junior golf tournaments.

He also said when he was denied entry into clubhouses because of the colour of his skin, he would ask two questions.

Those questions? Where is the first tee and what is the course record?

"I was never going to be denied to play. I had this burning desire to express myself in the game of golf," he said.

"I made practicing so hard. Hit thousands of balls, hands bleeding, just so I could play in a tournament."

He added the accolade was not his alone: "This is a team award. I just want to say thank you very much from the bottom of my heart."

Tune into @golfchannel for Tiger Woods Induction into the #GolfHOF pic.twitter.com/f17LadXzYf

Sam introduced her father and spoke of the legacy and impact of Earl Woods even though she unfortunately never met him.

"I feel like I can hear his voice every day," Sam, 14, said of her late grandfather, who died one year before she was born.

She described his car crash as one of the scariest moments of their lives.

"We did not know if you would come home with two legs or not," she said, describing it as one of his "ultimate lows".

"At one of the scariest moments of your life and ours," she continued.

She added: "This is why you deserve this. Because you are a fighter. You defied the odds every time."

Woods' mother Tida was also present in the front row of the audience.

Next page: Tiger shows off bare leg for first time since crash