Why did Butch Harmon call Tiger Woods an "arrogant pr**k"?!

Butch Harmon explains why Tiger Woods and Jack Nicklaus have been so dominant over the years on the PGA Tour. 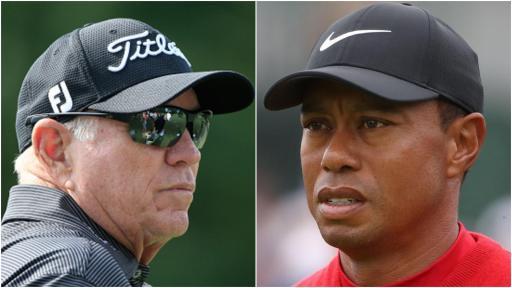 Tiger Woods was once labelled an "arrogant pr**k" by his former long-time golf coach Butch Harmon during an Instagram Live chat with his son Claude Harmon two years ago.

Well, the legendary golf instructor claimed it was no surprise to see Woods go on to win 15 majors at the 2019 Masters given the self belief the former World No.1 assumes by the time he reaches the first tee.

RELATED: TIGER WOODS WILL BE MAKING AN APPEARANCE AT NEXT WEEK'S GENESIS INVITATIONAL

RELATED: TIGER WOODS "LOOKS HUGE" IN HIS FIRST PUBLIC SIGHTING OF THE YEAR

"You absolutely need a streak of arrogance to be a great champion, to be the best at what you do," said Harmon, who worked with Woods from 1993 to 2004, helping him win eight majors.

RELATED: BUTCH - "IF TIGER DOESN'T LEAVE ME ALONE, I'M GOING TO HIT HIM WITH HIS CLUB"

"You’ve got to have a lot of pr**k in you. You have to be that kind of guy when you walk between the ropes.

"Tiger’s definitely that way — guys like him just want to cut your heart out."

Harmon then added: "They’ll go to dinner later on, or we’ll have a beer afterwards and joke. But when it comes time to play, I’m going to really get you.

"A certain Jack Nicklaus thought that way too, and he had that dose of arrogance you need. But you would never know it by his demeanour."

Harmon now sees similar mindsets in both Brooks Koepka, whom his son Claude coaches, and also Dustin Johnson, whom Butch and Claude used to coach.

"DJ is so laid back, but when he walks between the ropes he changes, and Brooks is the same way," said Harmon.

"They just want to beat you so bad. It’s what drives them.

"In Brooks’ case, I still don’t think he gets the credit for being as good as he is, even though he’s won four majors.

"But he uses that to his advantage. That’s why he plays with that big chip on his shoulder. You don’t think I’m good? Let me show you how good I am.

"And then people will say, ‘Well, how come can he play so good in majors and not good in other events?’

"Well, number one he gets up for the majors. He likes the challenge. He likes to be there. He likes being the man."

NEXT PAGE: TIGER WOODS GAVE ME A JOB, SAYS CHARLES HOWELL III AHEAD OF 600TH START