The star of The Bachelor teed it up on the 16th hole par-3 at TPC Scottsdale but he hit an awful toe shank which hit an unfortunate photographer. 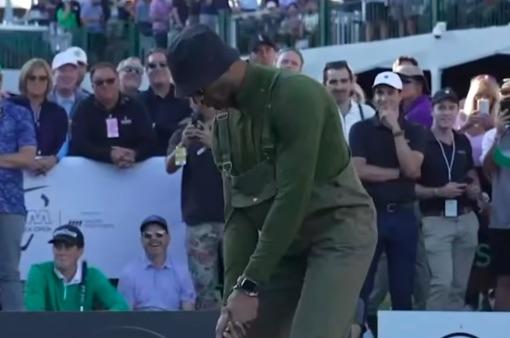 Matt James will wish he had never stepped foot on the stadium hole at TPC Scottsdale, and so will a certain PGA Tour photographer.

The popular American TV personality was attempting a shot into the famous par-3 16th hole which is synonymous with the WM Phoenix Open.

On Wednesday, the venue held the Annexus Pro-Am on the Stadium Course and the Phoenix Suns Charities Shot at Glory on the 16th hole.

James wasn't exactly dressed for the occasion. He had a green quarter-zip top on with a type of dungaree over the top of it. He also hit the shot bare-footed, without any golf shoes.

All the signs were that the star of The Bachelor wasn't going to find the green with his shot. Luckily, as you can see by the empty stands, not many people witnessed the incident.

James swung his 9-iron back and hit what looked to be a toe shank. The ball came off the very end of the clubface and went across the floor, hitting a photographer.

There was a group of photographers right next to James, so the pressure was on. Perhaps they forgot that it wasn't a seasoned PGA Tour professional on the tee box?

"I think I was aiming for the wrong hole. I took a divot on that first shot, I should've toned it down a little bit," said James.

"My swing speed was a little too... I was a little worked up. That second shot, I probably could've brought my own clubs out. I should've checked where the wind was going and it just came off the tip of my 9-iron. It was a clean thigh shot."

The photographer was shown footage of the accident at the end of the day and he laughed about it. So all was well that ended well, just about.