There is a world-class field teeing it up at the WM Phoenix Open this week and it looks like the world's best players are partying hard ahead of the event... 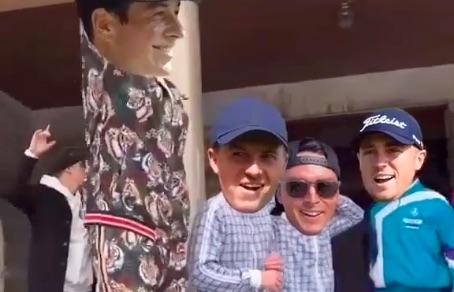 On some occasions, you have to sit back and applaud the imagination and creativity of golf fans and today is one of those occasions.

A video was posted on Instagram of a party taking place at someone's house, but there wasn't just any sort of person at the party. It was a rave for PGA Tour stars.

With the popular Darude - Sandstorm in the background, a number of the PGA Tour's best players are depicted as dancing and rocking out to the music ahead of the WM Phoenix Open.

On the left, we have a man in a full matching tracksuit with thick boots fist-pumping the air. This is, of course, Viktor Hovland who was criticised for his taste in music by his Ryder Cup teammates at the 2021 Ryder Cup.

A post shared by U Suck at Golf (@usuckatgolf)

In the centre of the video, we have the friendship triangle of Jordan Spieth, Rickie Fowler and Justin Thomas. Spieth and Thomas, with four major championships between them, are keeping it simple with their dance moves.

However, Fowler is going for it with some pelvic thrusts and some impressive moves at the end of the video. Could the five-time PGA Tour winner cut shapes like this in real life?

At the front right of the video, we have Harold Varner III who dramatically won the Saudi International last week. In real life, I imagine he's had a few drinks to celebrate what was just his second professional win.

Stood above Varner is none other than World No. 1 Jon Rahm. He is rocking a pair of sunglasses and much like his World No. 3 friend Hovland, he is also sporting a full matching tracksuit.

And finally, we have Tony Finau in a full blue tracksuit and Pat Perez dancing on a brick wall. It is the ultimate party that we all wish we could be at.