Will Zalatoris has paid tribute to his new caddie Joel Stock after the pair tasted victory together at the FedEx St. Jude Championship on the PGA Tour. 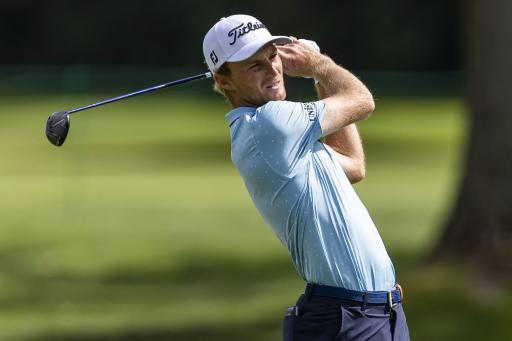 Will Zalatoris has revealed his new caddie Joel Stock pulled out some "dad jokes" down the stretch as he claimed his first PGA Tour victory.

After a tense three-hole playoff against Sepp Straka that also included the youngster contemplating a crazy shot, he finally got the job done.

He had a new caddie on the bag, Joel Stock, after he had to make the "toughest decision" to part ways with his "brother for life" Ryan Goble.

Speaking to the media this week ahead of the BMW Championship, Zalatoris paid tribute to his new looper and what made the difference.

Zalatoris joked that "it can only go downhill from here" but also pointed out that his new bag man also has a fondness for dad jokes.

Other than being told to focus on his breathing, this apparently was key to the pair making a good fit.

"Yeah, it's amazing how well we gelled," Zalatoris told the media at Wilmington Country Club.

"I've joked with him that he can only go downhill from here.

"The part that he did such a great job of, especially on Sunday, is just keeping me in the moment, just telling me to focus on my breathing, and then at times when things got a little tense he'd pull out some of his classic dad jokes to kind of make me laugh.

"He did just an amazing job, especially considering that Monday was our first day together. Hats off to him going down the stretch."

He added: "Being able to be in the moment and just tell me, hey, this is the club, commit to this shot, considering we've only been together for that short amount of time was incredible.

"I can't obviously thank him enough. He's been exceptionally involved and he's picked everyone who's around me's brains about my game to try to make it better, and honestly, even though we won our first week, we're still adjusting.

"There's still things that we need to do just a little bit better here and there, and that's the beauty of this game."

Zalatoris admitted that although he's had a few cocktails with friends he still hasn't fully celebrated yet.

The real party will come after the conclusion of the FedEx Cup Playoffs after the Tour Championship at East Lake.

Zalatoris has a lead of 124 points over Scottie Scheffler in the standings now heading into this week.

Given that the monkey is now off his back, you wouldn't bet against the floodgates opening now.

Next page: Tiger and Rory react to "LIV Golf" meeting