Tiger Woods says he is "excited and honoured" as he returns to the front cover of a video game for the first time in nine years. 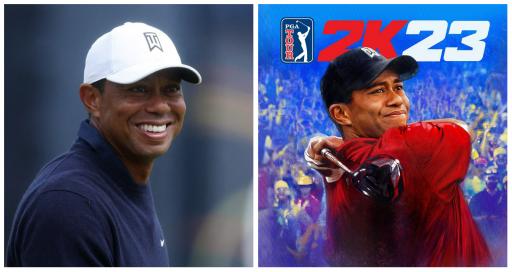 It was nine years ago that Tiger Woods was last on the front cover of a video game, but that is about to change.

So much has happened in his life during this period. Multiple back surgeries, an arrest for driving under the influence, his horror car crash.

But now, Woods is returning in pixelated form. The popular Woods tracking account @TWLegion confirmed some of the leaked details on Wednesday.

"PGA Tour 2K23" was briefly listed for pre-order on Amazon. New details were also confirmed that includes the licences for new courses to play.

#BREAKING: Tiger Woods returns to the cover of a video game , becoming the face of PGA TOUR 2K23. (: @Steve_OS) pic.twitter.com/AGRuFhQ31j

There is also a Topgolf mode. Moreover, buyers will also have the opportunity to purchase a "deluxe addition" with exclusive cover art.

Apparently there is a Michael Jordan Bonus Pack.

This was one of the worst kept secrets in the video game world. Woods has been rumoured to be the cover star for several weeks.

Now Woods has confirmed it, by posting:

Woods, 46, will serve an active role as an executive director and consultant with PGA Tour 2k.

"I am looking forward to making my return to the video game landscape, and with 2K and HB Studios, I've found the right partners to make it happen," Woods said in 2021.

"I'm honored to take part in this opportunity and look forward to sharing my expertise and insights as we build the future of golf video games together."