Will Zalatoris vs Garrick Higgo - Who should win PGA Tour Rookie of the Year?

Will Zalatoris could become the first player to win the PGA Tour Rookie of the Season without being a member of the PGA Tour in 20 years. 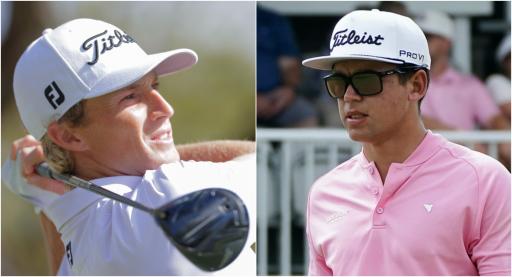 As the season draws to a close, we are soon to found out who has won the individual 'Player of the Year' awards.

Jon Rahm has won the PGA of America Player of the Year award, after a fantastic season that saw him win the US Open and become the World No. 1 again.

Another title that is soon to be decided is Rookie of the Year, which is between the young American Will Zalatoris and the impressive South African Garrick Higgo.

Zalatoris has performed beyond his years and experience in 2021. Having only turned professional in 2018, the 25-year-old had the week of his career at The Masters in April where he finished second behind Hideki Matsuyama.

RELATED: THE OPEN CHAMPIONSHIP SET FOR SENSATIONAL RETURN TO ROYAL PORTRUSH IN 2025

Zalatoris was ranked 18th in scoring average and ranked 22nd in strokes gained in total and this led to eight top-10 finishes in 25 PGA Tour events.

As he didn't manage to win an event this season, he was not allowed to participate in the FedEx Cup Playoffs, but he has now earned himself a card for next year.

Zalatoris could become the first player to win the Rookie of the Year award without being a member of the PGA Tour since Charles Howell III in 2001.

Unlike his US opponent, Higgo won for the first time on the PGA Tour at the Palmetto Championship in June. This came off the back of some superb performances on the European Tour.

The 22-year-old already has three wins to his name on the continent and when he won the Canary Islands Championship, he equalled the record for the least amount of European Tour or PGA Tour events needed to reach three wins since 1990, a record he now shares with Tiger Woods.

His win included a score of 27-under-par which was only two shots short of the lowest ever winning score on the European Tour set by Ernie Els.

Higgo has not matched the impressive form of Zalatoris on the PGA Tour, having made only one top-10 finish, but his breakthrough win in the States was a crucial moment in his short career so far.

Who do you think should win the PGA Tour Rookie of the Year award?

NEXT PAGE: THE BEST PETER MILLAR JACKETS THAT YOU NEED AHEAD OF THE AUTUMN