"We're going to throw it as far as we can, brother," were the words uttered by John Daly before he took his pitch at the Busch Stadium. 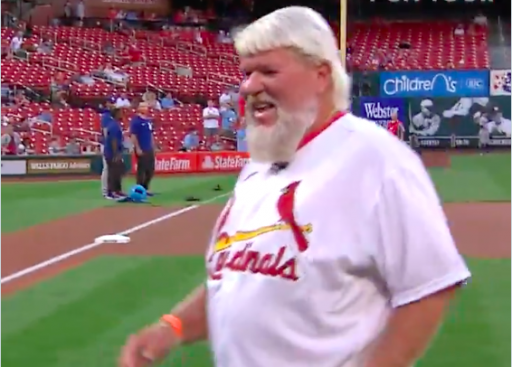 The St. Louis Cardinals hosted the Los Angeles Dodgers at the Busch Stadium earlier this week and the two-time major champion was chosen to throw the first pitch in front of the crowd.

In typical Daly style, he said, "We're going to throw it as far as we can, brother." And he did. After overthrowing his pitch, he then threw the ball back into the crowd for a lucky fan to take home with them

Daly is a Cardinals fan and when he threw his pitch, he donned a jersey that had the number 91 on his back. This paid homage to his maiden major title at the 1991 PGA Championship when he incredibly sealed victory despite being the tournament's last reserve.

First pitch like you haven't seen before. ⚾️@PGA_JohnDaly at the @Cardinals game. pic.twitter.com/zW6NmtrKzH

The man from California etched his name into golf history even further in 1995 by winning The Open Championship, famously beating Constantino Rocca in a playoff at St. Andrews.

Daly was the original big hitter on the PGA Tour. He made 300-yard drives the rule and not the exception. But although he had a long and lopping swing, his rhythm and tempo was also first class.

Daly is in the field for the PGA Tour Champions Ascension Charity Classic at Norwood Hills Country Club this week, which is just a short drive from where the Cardinals play baseball.

NEXT PAGE: CHRISTIAAN BEZUIDENHOUT: FROM NEAR DEATH TO THE EUROPEAN TOUR