Jon Rahm finished second at the Sentry Tournament of Champions and he has started very well at La Quinta Country Club on Thursday. 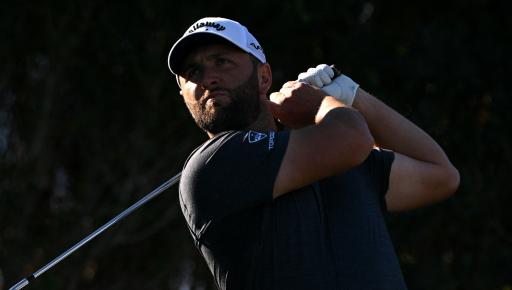 Jon Rahm is simply a PGA Tour scoring machine and he proved this title with another 66 on day one of The American Express.

Having finished in second place on 33-under-par at the Sentry Tournament of Champions with three scores of 66, Rahm shot yet another 66 on Thursday at La Quinta Country Club.

Since winning his first major title at the US Open at Torrey Pines in 2021, the Spaniard has played 33 competitive rounds worldwide and he has shot 66 or lower in 15 of them.

Rahm made two birdies on the front nine and four birdies on the back nine to shoot 6-under-par for the tournament. When he finished, he was four shots behind the clubhouse leader Lee Hodges.

RELATED: WATCH: PGA TOUR PRO HAS AN ABSOLUTE MARE ON THE ROCKS AT AMERICAN EXPRESS

Rahm won this tournament when it was named the CareerBuilder Challenge in 2018 and he also finished sixth when it was called the Desert Classic in 2019.

So far in 2022, the six-time PGA Tour winner has played 90 holes. He has only made one bogey and an incredible 38 birdies. In this stretch, he is 39-under-par.

It is this sort of form that won Rahm the PGA of America Player of the Year award in 2021. Fellow European and 2021 Ryder Cup vice-captain Graeme McDowell also played well in the first round of The American Express.

The Northern Irishman, making his seventh appearance of the 2021/2022 season, made seven birdies and one bogey at the same course as Rahm to finish on 6-under-par.

Francesco Molinari and Jason Day are a further shot back on 5-under-par, five shots behind Hodges. The clubhouse leader made eight birdies and a fantastic eagle on the 5th hole at La Quinta to fire a 62.

Hodges, 26, is making just his 14th appearance on the PGA Tour. He missed the cut at the Sony Open in Hawaii last week.

NEXT PAGE: PHIL MICKELSON SMASHES DRIVER OUT THE BUNKER AT AMERICAN EXPRESS