Xander Schauffele moved into a strong position at the Travelers Championship after Rory McIlroy struggled. 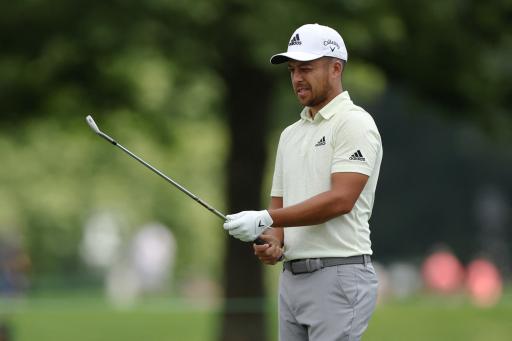 Xander Schauffele looks primed to earn his sixth win on the PGA Tour after moving five shots clear of the chasing pack at the Travelers Championship through 36 holes as Rory McIlroy endured a nightmare back nine.

American Schauffele has hit 33 of 36 greens in regulation so far at TPC River Highlands in Connecticut and added his second consecutive round of 7-under 63 to reach the top of the leader board.

Schauffele, who has revealed that he has turned down an “obnoxious” offer to join the controversial LIV Golf series, is being chased by Patrick Cantlay, Harris English, Nick Hardy, Cam Davis and Kevin Kisner who are all on 9-under par after two rounds.

McIlroy started the day in the lead and turned in 4-under par. But his round unravelled at the 12th hole when he recorded a devastating quadruple bogey eight on the short par-4.

It was only the sixth time in his PGA Tour career that he recorded such a score. Another double bogey at No.15 followed although he did claw one shot back to sit on 8-under par.

McIlroy is searching for his 22nd PGA Tour victory after winning in Canada two weeks ago. The Northern Irishman, 33, has been fighting illness and sounded unwell after round one.

Schauffele said: “It's only Friday. We've got 36 more holes, and I need to stay aggressive. This is a course that's giving up some birdies, and if you're leading the pack and you get kind of comfortable, people are going to hunt you down.

“It's definitely something Austin [caddie] and I will talk about and kind of stick to what we've been doing. Obviously, it's been working out just fine. Sticking to the process is always a good thing.”

Leader board after 36 holes