Rory McIlroy to Sergio Garcia on LIV Golf riches: "We don't deserve to be paid"

Rory McIlroy has been the most vocal advocate for the PGA Tour during the emergence of the LIV Golf Invitational Series, even if it's meant stepping on some toes. 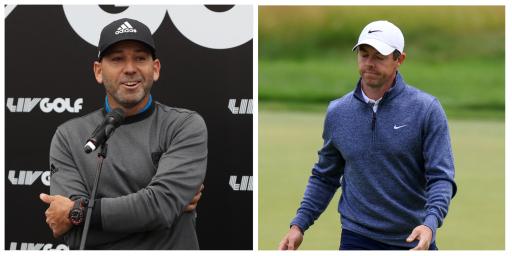 Rory McIlroy told Sergio Garcia that golfers don't deserve to be paid anything when discussing the riches being offered by the LIV Golf Invitational Series.

According to John Feinstein of the Washington Post, Garcia told his Northern Irish friend that they now had the chance to "finally get paid what we deserve."

McIlroy reportedly laughed out loud at his close friend's comments. "Sergio. We’re golfers. We don’t deserve to be paid anything," is what he said back.

Garcia was one of the initial 17 players suspended by the PGA Tour for competing in the first LIV Golf event at Centurion Golf Club near London. He has now resigned his membership having joined the tour in 1999.

The former Masters champion is also set to be fined £100,000 by the DP World Tour and banned from playing in the Genesis Scottish Open, the Barbasol Championship and the Barracuda Championship.

Garcia revealed his plans to leave the PGA Tour in the first round of the Wells Fargo Championship when he stated, "I can't wait to leave this tour," when frustrated at a ruling.

When Jay Monahan announced the suspensions on June 9, Garcia was largely unphased when he was told and described his excitement to play LIV Golf.

"It doesn't bother me, I am very happy where I am," Garcia said at the first event of the breakaway series commissioned by Greg Norman.

"I am excited for this tour, thought today was a great day to start. That's where I'm going to focus. I resigned a week and a half ago, so whatever the PGA Tour says, that doesn't go with me because I'm not a member. I resigned because I didn't want to get into any legal battles.

This approach is the polar opposite of McIlroy. He celebrated winning the RBC Canadian Open by pointing out he had now won more PGA Tour titles than Greg Norman.

The four-time major champion shared the lead overnight at this week's Travelers Championship as he looks to make another statement.

Next Page: I did not expect this! Cobra Forged Tec ONE LENGTH Review 2022