PGA Tour pro Xander Schauffele has revealed why he has so far turned down the advances of LIV Golf. 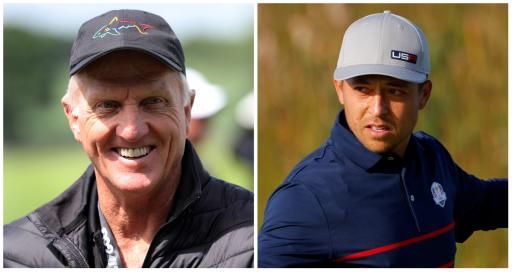 Xander Schauffele has claimed even his own fans would label him "an idiot" for not accepting an “obnoxious” offer to ditch the PGA Tour in favour of the LIV Golf Series.

Schauffele was one of the most heavily-linked players to leave the PGA Tour but has so far been loyal, insisting that he believes that the best talent still remains on the established circuit.

However, he has revealed that he is “not going to lie” about the lucrative offers that are being thrown at players. He described them as "obnoxious".

The 28-year-old, who is yet to win a major championship despite his obvious talent, has confirmed that he has held meetings with PGA Tour commissioner Jay Monahan over his future.

Tour boss Monahan would not reveal what has been said in meetings with players, insisting that those conversations were private. However, he has confirmed some huge prize purse increases.

Those prize purse increases will be in place for the 2023-2024 season, with at least $20m on offer in eight-events that will be available to players who are ranked 50th or higher in the FedEx Cup.

“I’m very happy with what’s going on the Tour for the most part and I feel like there’s enough here,” Schauffele told The Zach Elb Show.

“I know we’re competing against a big pot of money that’s sort of never ending, you can strike out a million times but there’s still gonna be on that plate swinging so it’s a hard competitor to go up against but I feel like there’s enough on this Tour and enough talent to make it the best in the world and keep it the best.

“I’m not the first one to sit here and lie to somebody, the numbers being thrown around are very obnoxious.

“There are certain numbers that even fans of mine, if they looked at it and sit it they’d tell me I’m an idiot for not going, but right now, I’m 28-years-old, I want to win major championships, I want to win PGA Tour events, and I really think we can make this product on the PGA Tour, it’s been the best and now there is competition, and we can keep it the best with the talent we have, we just kind of need to unify and keep it together.

More: Scheffler says he's paid too much to play golf

He added: “So to any one of my fans, words are words, and actions speak louder than words, and right now my actions are to stay on the tour and you’ll see me out here competing on the PGA Tour circuit.”

Schauffele was speaking after Brooks Koepka became the latest player to sign for LIV Golf.

He described that move by the four-time major winner as “a bummer”.

“I don’t hold it against any individual that leaves,” he said.

“He’s been number one in the world and carried that when he was there.

“I like to compete. People have their reasons for going and I guess I don’t hold that against them. “Selfishly I’m sad that I don’t get to play against him any more at this moment.”