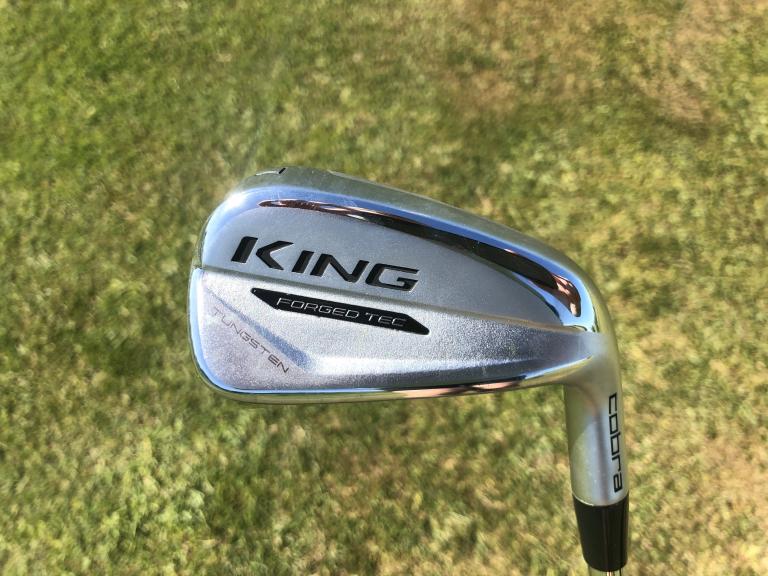 The King Forged Tec irons are the first hollow body players iron that Cobra has designed and it's safe to say that when they were first released, everyone was impressed from an aesthetics point of view, but how well do they perform?

We took the irons for a round at Farleigh Golf Club and put them to the test, hitting a range of different shots, from the tee, on the fairway, out of the rough, you name it, we tried it.

A hollow cavity is infused with energizing foam microspheres that fine-tune acoustics and create the softer feel that better players desire while supporting a thin PWRSHELL Face for increased ball speeds.

A tungsten toe weight centers the CG behind the hitting zone to maximize distance and increase precision for attacking pins, even on off-center hits.

Like a majority of COBRA equipment, the Forged TEC irons will feature the innovative COBRA CONNECT™ Powered by Arccos allowing users to track their accuracy and distance using the Arccos Caddie app on a smart device. Electronically embedded sensors in the grip automatically record the distance and accuracy of every shot so golfers can track their improvements round-to-round.

For Cobra's first attempt at an iron in the 'players' category, we think the brand has done a fantastic job.

When it comes to players irons, you want it to look more like a blade but give you the distance and forgiveness that you mainly find in game-improvement irons.

The Cobra King Forged Tec certainly looks fantastic. It has a small and compact head that players using this type of iron want to see, with bold features and a clean design.

At address, the iron fills you with confidence, as the iron has a fairly large face size and a topline that's thick enough for you not to fear the club.

The iron does have quite a TaylorMade P790 feel about it in terms of design, but that's certainly not a bad thing given how successful the P790 turned out to be.

In terms of performance, the biggest highlight for us was the distance consistency that the Forged Tec irons have to offer.
In players irons, you can sometimes find yourself scratching your head as to why you've just hit a club 10 yards further than you usually do, but we felt that with these in hand, that was never a problem.
The King Forged Tec irons are very easy to hit and will cover a vast range of handicaps. In terms of distance, these irons won't let you down, although considering the fairly strong loft set on these irons (7-iron is 29.5°) we expected a few more yards, but you can definitely overlook that due to the fantastic level of consistency.

Overall, Cobra has produced a fantastic iron to compete in the players category and with the correct custom fitting, these could be a fantastic addition to your bag if you're looking to buy new irons.

The distance and forgiveness element of these irons make them extremely desirable for many players, whilst the compact design and clean look makes for a very attractive club at an affordable price.