By improving the head shaping and making the airflow more efficient, Adams is claiming 10 per-cent less drag and therefore 15 more yards of carry from its new driver. Loft options for the standard driver will be 8.5, 9.5, 10.5 and 12.5 for right-handers (9.5 and 10.5 for left-handers) and for the draw version will be for righthanders only (9.5 and 10.5). For women the loft will be 12 degrees (RH only). 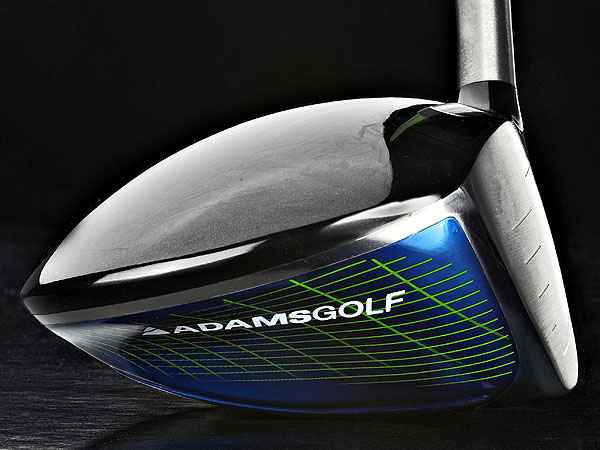 This club hits the ball plenty far enough, though not as consistently straight as the Nike Machspeed. As for its looks at address, they're about as good as a driver could be.

Cynics would call it clutching at straws but serious golfers appreciate and get excited about, the continued efforts of manufacturers seeking to innovate and generate an extra yard or two of carry within the Rules.

Three years ago, buoyed by its success in the fairway wood and hybrid market, Adams Golf started making prototypes of driver heads designed specifically for those muscle-bound contestants in the Long Drivers of America (LDA) series of events.

Head of research and development at Adams, Tim Reed, discovered that, because they created more drag, the modern square or extreme-headed drivers lost these players 3% of the clubhead speed they achieved with more traditionally-shaped heads. It meant ball speed was down of 6mph and the result was a loss of six to eight yards of carry. For a golfer - man or woman - whose reputation and success hinges solely on how far they hit the ball, that's like driving with one hand tied behind your back.

Precisely the same loss of clubhead speed was found when Adams used amateur golfers for their tests, though compared to a pro's 135mph clubhead speed, the amateur's 90mph meant the distance loss was less significant.  But in a world where technology-mad golfers will pay for a a guaranteed extra yard of carry the concept that a more aerodynamically-sound clubhead will out-drives their mates, is compelling.

Immediately Reed and his fellow designers rejected square-shaped heads and opted instead for the more traditional Speedline range creating a new aerodynmic form that reduced drag and airflow turbulence. While others including Callaway, Nike and Hippo took the high (MOI) road, Adams took the short cut to increasing speed and distance by reducing drag.

To the average golfer with a limp 90-95mph swing speed with the driver, the reduction in drag and potential ball speed increase compared to the Nike Machspeed, for example, is almost indiscernible. But who cares, if you believe the ball flies four or five yards further?
The test I conducted was rudimentary at best - two afternoons at the range and about 500 balls hit with the intention of gauging the club’s looks, feel, sound and launch. What I can tell you with some conviction is that in these four areas the Speedline scores very highly.

Describing the Adams Speedline Fast 10's looks as plain would be misleading - it's modest, discreet and unassuming. The aerodynamic-shaping on the club’s underside is concealed by a beautifully black and unpretentious crown. The face looks perfectly square at address and the grip feels agreeably soft, unlike the Cleveland Launcher DST’s rugged tyre-like grip (that club’s only flaw).

Hit the Fast 10 shortly after trying the Cleveland Launcher DST and the difference in weight between the two is clearly apparent - the Fast 10's stock shafts (Aldila Wasabi, Matrix HDA) weigh 60g - 13g heavier than the DST’s Diamana shaft (claiming 25g lighter than other drivers). But try them a day apart and, unless you are particularly sensitive to these things, you won’t pick up the Fast 10 and immediately comment on how much heavier it feels.

As all-titanium drivers should, the Fast 10 gives a pleasing sound feedback at impact as the ball sets off fast and high. I tested the 10.5-degree club (8.5, 9.5, and 12.5 degree lofts are also available) with a stiff Matrix HDA shaft and found the ball launched on a pretty similar angle to that which I got with the DST and the Nike VR (both 10.5 loft with stiff shaft). As for shaft flex, the Matrix HDA did feel a little stiffer than the Diamana, and significantly less flexible than the Axivcore in the Nike Machspeed.

Adams claims that the 10% reduction in drag produced by the more stable airflow around the clubhead, leads to 10% more distance. On a typical 250-yard drive, that’s an extra 25 yards so it's an ambitious claim and, while it almost certainly didn’t happen for me, I’m not discounting the fact that the Fast 10 could well have hit the ball a little further. A longer-term test will no doubt realise more revealing results, but until then I shall be satisfied that this club hits the ball plenty far enough, though not as consistently straight as the Nike Machspeed. As for its looks at address, they're about as good as a driver's could be.