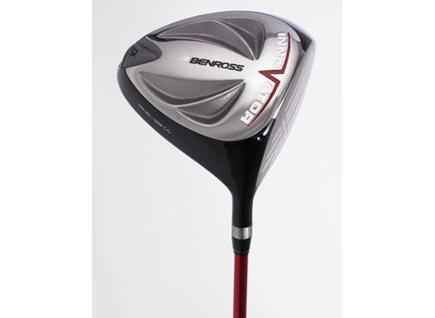 Watch any of the game's coaches and gurus on the television, read their thoughts in books and magazines or even read their blogs on various websites and they'll all tell you that if you want to be serious about golf, the chipping and putting green is the place to be. Hours spent there will shave off those all-important shots which can turn a good round into a great one.

But hang on a minute, we don't all want - nor have the ability, time or inclination - to put in the hours of practice required to become a Category 1 or even a single figure player. Nor can we afford to spend a fortune on clubs. Many of us just want to get out there with a big, shiny driver and feel the pure pleasure of giving that little white ball a bloody good hiding and watching it sail off into the distance.

And that's where today's budget buy big boys come in - and they don't come a lot bigger than the Benross Innovator X driver, which features an innovative stretch bullet-shaped body design.

At address, it's difficult to believe you can avoid making great solid contact as the large, deep face sits behind your teed-up ball.

In an effort to make things even easier for us handicap golfers, Benross engineers have put the maximum body weight low and deep and as far from the clubface as possible at the pointed end of the bullet.

This makes the Benross Innovator X a very stable driver with a high degree of resistance to twisting, which helps it be even more forgiving of any slight miss-hits

Interchangeable weights (3g and 9g) provided with the driver, allow golfers to customise their ball flight to suit their game and/or course or weather conditions. Benross says that swapping between weights can increase or decrease a golfer's driver launch angle by up to three degrees, so hopefully your last words to your golf ball as you strike it off the tee won't be 'when will I see you again?' (apologies to any in our younger audience who may not recall one of the greatest 1960s songs by the appropriately-named 'Three Degrees').

Available three loft options, as mentioned in our review of budget drivers earlier this week, I tested the 10-degree Benross Innovator X both out on my home course at Stoke Rochford, near Grantham, and on the range at Stapleford Park Golf Club, near Melton Mowbray.

The promise of forgiving strikes was kept from the word go and most of my errant drives were the result of slight blocks or pulls rather than hooks or slices, but well-struck shots brought a satisfying trajectory through the air, with little ballooning into the wind as the driver is designed to cut down the amount of spin.

The Benross Innovator X is a solid ball striker for those of us who just want to get out there and give it a good blast while minimising the risk of running out of balls. A good performer at a good value price.