Offset design of the head, encourages a draw bias with appeal to mid to high handicappers. Similar black in head and shaft to S3 driver but is non-adjustable. Available in 9.5, 10.5 and 11.5 degree lofts plus 13.5 and 15 degree lofts for women's models. Also features E-face technology - a taller, eliptical face and beveled perimeter for a larger sweet zone and more forgiveness a crown alignment Design to and help keep club on desired swing path. 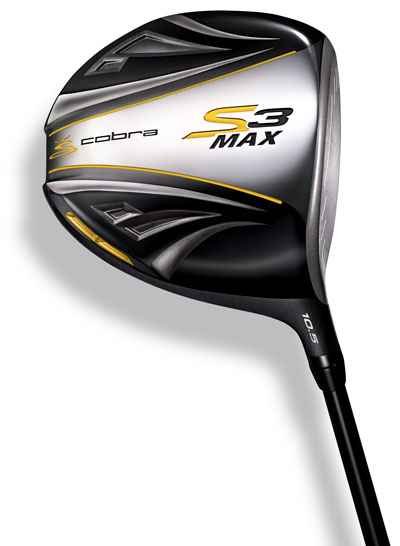 I teed the ball higher, aimed down the right and hit it as hard as I could.

With drivers I tend to find you either love 'em at first sight...or you hate 'em.

With the Cobra S3 Max Offset, I've learned to love it after an unhappy start to the relationship when I pull hooked my opening tee shot in my first competitive round using it, lost the ball and recorded a double bogey.

The club was not my friend, so I ignored it for a couple of rounds while I courted its more expensive Cobra S3 adjustable brother.

But today, having returned from a golf-starved holiday I decided to give it a second chance and cosied up to it with a more aggressive swing to see how it responded.

The offset on the clubface is distinctive - turned in at least a couple of degrees - so rather than try to make my regular fade more accurate using its anti-slice characteristics, I went for a more aggressive option.

I teed the ball higher, aimed down the right and hit it as hard as I could.

The result was a succession of high-flying shots with a touch of draw which out-drove one of my playing partners who regularly pummels the ball passed me.

Confidence oozed from me and reduced a bunch of par-4s to little more than a drive and a short iron - allbeit the current hard ground does wonders for your ego!

If you're whimpy fader of the ball like I was and losing distance as you reach more mature years, get your hands on one of these. Tee it up, aim down the right half of the fairway for a change and smash the ball as hard as you dare.  It's an unfamiliar tactic for most of us but with this club it works and you'll be watch high arcing draws and the ball bounding towards the green.