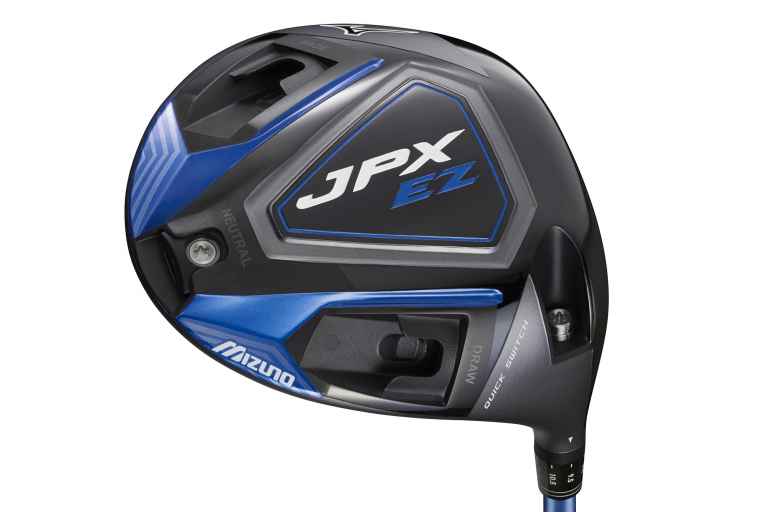 The Mizuno JPX EZ 2016 driver offers loads of forgiveness, and is incredibly accurate.

Mizuno is renowned for producing some of the best irons in golf. Superb feel, consistency and stunning aesthetics are offered in its wrenches.

In the last few years, Mizuno has made giant strides with its drivers, and while they are not of the same ilk as its irons (a victim of its own success, to some extent), the gap is shrinking every iteration.

The Mizuno JPX EZ is the latest driver in the range.

Non golfers find it hard to understand, but aesthetics are important in a golf club. Mizuno’s clubs always suit our eye, and the EZ driver follows suit.

A grey crown contrasts appealingly with flashes of blue on the crown and sole, and we are enamoured with the blue shaft. The Runbird logo is used as an alignment aid, which works nicely.

Behind the ball, the driver has a large profile, which will inspire confidence. Like 2014’s JPX EZ driver, it has a rounded profile.

Like its irons, the Mizuno JPX EZ boasts a beautiful soft feel. From the middle of the bat, we enjoyed a springy feel, which lets you know you’ve found the sweet spot.

In terms of distance, the Mizuno JPX EZ sat in the middle of the pack. While it’s not pulling down any trees, it’s a solid performer.

Regarding forgiveness and dispersion, we were impressed. There’s a load of help on off-centre hits, and it boasted some of the best accuracy of any driver we’ve hit this year. Not long, but deadly straight, and it's easy to see why the likes of Chris Wood and Luke Donald have been dabbling with this club.

The sound is relatively loud, but not unappealing. Those who are sensitive to these kind of things may take exception, but we didn’t have any issues.

The 2016 JPX EZ follows it’s predecessor in employing adjustability, but adds more to the basket.

A three-weight system is employed, allowing players to slot a 10 gram weight into position, to either promote a draw, fade, or neutral shot. The Japanese brand did not opt to employ tracks or weight ports, as it believes it makes drivers less playable.

The Mizuno JPX EZ 2016 driver offers loads of forgiveness, and is incredibly accurate. Not the longest on the market, but boasts a soft, lively feel that will excite.

While better players may assume this is for the mid to high handicapper, it has the attributes great ball strikers are looking for.