If you like adjustability and the opportunity to tinker with your driver this is the club for you. The square head helps with stability at impact and once you've found your optimum set-up, it can really straighten you out. 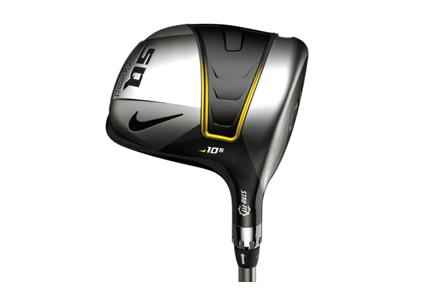 If you like adjustability with a square head, this driver's for you

After winning the Open Championships of both the United States and Britain this summer, you could be forgiven for wondering what the poor old SQ Dymo2 did to annoy its bosses at Nike Golf.

Just a matter of months after guiding first Lucas Glover and then Stewart Cink to major championship glory, the club is about to be put out to pasture and replaced by this hot new model. In the cut-throat world of golf club development, there is clearly no room for sentiment.

It's about the aerodynamics

Visually, it trumps any previous SQ models, with its sleek, tapered design, and a sole diffuser that looks like a spin-off from the Brawn world championship-winning F1 car. The similarity is no accident, either, because after different materials, different shapes and different sizes, one of the few remaining boundaries to push is aerodynamics. And in the Machspeed, Nike Golf has attempted to do just that by working hard to minimise air separation and drag throughout the golf swing.

That's the theory anyway. Whether it adds significant distance to the length of your drives is too early to tell. But I can testify it's a powerful club all right. It really does put it out there but whether aerodynamics really affect the swing speed in a meaningful way has yet to be proved, categorically. I'd like to see Nike produce data that says 'the drag is XX% less than on previous models, equating to XX yards extra distance.' I have asked the question but as yet Nike hasn't responded. I'll let you know when they do.

Adjust to suit your swing

Though Nike is hanging its hat on the aerodynamic element, I'd much rather look at what we can really see working. The Machspeed is not just aerodynamic and not just a square head.. it also boasts the fantastic STR8-FIT technology that allows the player to create eight different face angles and potentially eight different shot shapes… assuming you can deliver the club to the ball in the same way every time.

In my book, being able to change the face angle, the lie angle and even the loft angle by rotating the shaft to one of eight predetermined positions is a brilliant innovation that really does work. Turn the face in two degrees and I can hit a nice draw.

If you're a serial slicer, like probably 80 per-cent of golfers, you're going to struggle to hit the draw shape. But by adjusting the face to a closed position with the tool at your disposal, at least you will have every chance of cancelling out some of those uncontrolled, left-to-right ball flights.

Being able to adjust to suit your swing characteristics on any given day is a far more realistic approach to straighter driving than simply telling a golfer to improve his technique. That needs coaching and it needs practice. At least with adjustable face technology, we can make the best of what we've got. Controlling the height and trajectory is also a massive boon, allowing us to set up the club to suit the wind or the conditions.

So, overall, how does the Machspeed play?

Actually, very well. I'm a fan of the square heads, and this one is no different. It sits neatly at address, doesn't look as large as previous models, and has nothing to distract the eye. At impact it's very solid, very powerful, and unlike some previous models, the sound generated is less tinny and more, er, titaniummy. Put it this way: hit one of these at a driving range and you won't have everyone stopping to stare.

If you like the look of the head, it offers so much versatility and could be a club that you'll keep hold of for some time. It's easy to hit, totally adjustable and really does have a unique visual appeal. An excellent driver.