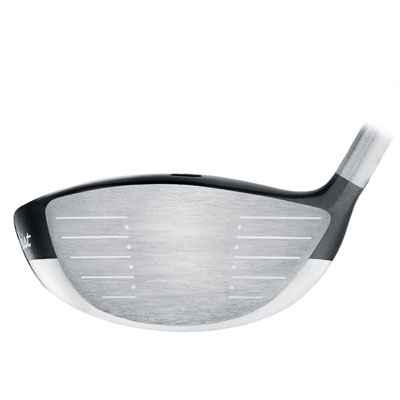 As my back started to hurt, kids began appearing in the family and my golf went into a sad and apparently irrevocable decline, Titleist golf clubs became something of an afterthought.

Titleist unashamedly made clubs for the better player after all, and while I had enjoyed some success with a set of DCI Black irons and a 975D driver back in the days before Tiger Woods and the internet, the day had come for me to adopt irons with a larger cavity, a thicker top-line and a driver with as much cubic capacity as was available , not to mention a much lower centre of gravity.

There’s still plenty of room in the bag for the Titleist golf balls, of course, but I wasn’t altogether excited about hitting the 909D Comp.

But it looks absolutely fantastic with the same simple, black crown that makes the Cleveland Launcher DST, Adams Speedline and Nike VR, among others, so attractive. The 909D Comp’s head is a little longer from front to back than the all-titanium 909D2 and 909D3 and appears a little flatter and to have a lower profile.

There's also a small alignment mark (Titleist’s familiar line and triangle) on top which probably won’t correctly align the player who naturally sets up 20 degrees right of target but it won’t hurt.
Before hitting the first ball I also noticed that the grip is quite a bit thinner than other drivers which might be a problem for someone with long fingers. They might expect to release the clubhead a little too quickly, close the face and find trouble on the left.

And when my first shot hung out to the right, something else became readily apparent - the stiff Matrix Ozik XCON 5 shaft feels significantly stiffer than the 'stiff' Mitsubishi Diamana 44vsl (which is 20g lighter) in the Launcher DST, the 'stiff' Aldila Voodoo in the Nike VR and the 'stiff' Matrix HDA in the Speedline all of which I hit alongside the 909D Comp to get a good feeling for the conflicting flexes. The face is half a degree open but unfortunately that alone could not be blamed for just how far to the right that shot flew.

Unlike the Nike VR (or TaylorMade R9), the Titleist 909D Comp does not have an adjustable head. So instead of getting the wrench out and simply closing the face a degree, I needed to make a couple of changes to my address position and to my swing if I was to bring the ball back on to the fairway. A slightly stronger, but lighter, grip and a conscious effort to stay behind the ball and rotate the forearms had the desired effect though the ball came out quite a bit lower than I expected.

With its composite crown which helps lower the centre of gravity, 10.5 degrees of loft and a medium tip shaft which, according to its maker, possesses a bending profile that encourages high launch without excess spin, I had hoped the ball would set off a little higher than it did. The ball travelled a good distance but not in the manner I had expected. I got fairly penetrating medium launch with a decent amount of roll, rather than high launch with greater carry.

Clearly I need to swap the stiff shaft for the regular (my swingspeed is between 90mph and 95mph), and also put a layer of tape under the grip.

I can really only comment on the appearance of the elegant clubhead and its sound at impact, which I considered just about perfect - neither tinny nor too high-pitched, but not lacking in volume either. Though I need to alter the specs slightly, the 909D Comp is clearly a very good club. As I mentioned before, the face is half a degree open which suggests it’s designed for the better player but, with the right shaft, I’m certain a 10-15 handicapper could learn to love it.