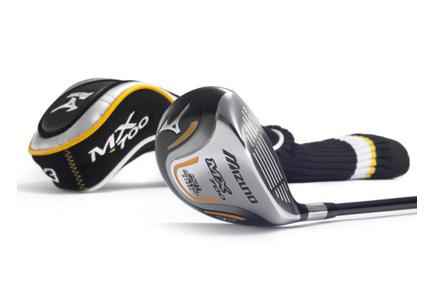 While driver heads are flattening and widening to give more forgiveness and stability incorporating high MOI this gem from, Mizuno instills confidence by retaining its classic shape yet packing a punch.

It was no coincidence that, my best round for over a year (six shots under my 11 handicap) was achieved with this latest, sweet-feeling 3-wood from Mizuno in my bag.

Apart from a series of short sessions on the range, I'd used it for only two social rounds before it confirmed its place in my bag at The Warwickshire at the weekend.

Despite preferred lies, the fairways were tight which meant that ball-striking had to be precise to give myself a chance of making full use of the MX-700's 15-degree loft, low profile face and its penetrating trajectory.

The MX-700 3-wood felt powerful yet forgiving off the clubface and will prove appealing for all players from seniors with moderate ball speeds like me to those who can deliver a much faster clubhead speed.

At address, whether off the turf or from a low tee my eyes focussed with confidence on the sleek clubhead and its subtle but distinctive crown markings.

The new Ti9 face insert helps deliver a satisfying thump to the ball at impact and though the idiosyncrasies of my swing rarely get the ball on a high trajectory, it tends to run for ever. And that can be irritatingly beneficial against fellow golfers who tend to thrust themselves almost off their feet in a bid to keep up in distance.

As well as delivering stability to the hitting area, the ES230 steel used in the new MX-700 3-wood has given a hotter feel to the ball off the clubface - an element that Tour pros have been increasingly demanding as courses get stretch to the limit and reachable par-5s become increasingly vital.
Mizuno fairway wood
Power-packed: the low profile face still packs a punch

As Mizuno's research and development manager David Llewellyn says: “The requests from our players for hot faces used to be confined to drivers, but these guys are trying to squeeze out every possible yard. It isn't as easy to get that 'hot feel' with from a smaller more rigid clubface, but we've done everything we can to get that lively feel at impact."

Credit must also go to the distinctive Mizuno Exsar FS4 shaft (my preference is a regular flex), fitted as standard. it played it part in delivering consistency to the clubhead and solid feedback through the fingertips.

And the new black, yellow and silver livery of the roomy clubhead cover with its black protective sock has earned some nosey looks from fellow golfers more used to seeing the regular blue and white of the Mizuno brand.