A sporty-looking product that excels in the performance stakes. 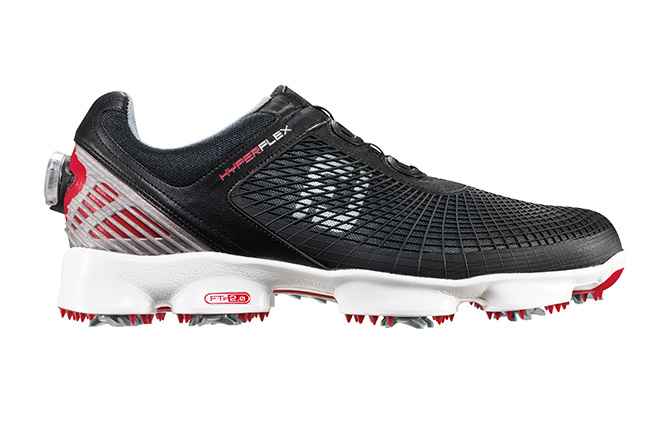 FootJoy’s Hyperflex is billed as the brand’s “athletic” shoe offering, and it ticks every box for a product claiming such a title.

The most striking aspect of the Hyperflex shoe, the original version of which was launched in January, is the appearance. FJ took a step away from the more “traditional” golf shoe look they have exploited over many years, and catered to the golfer who wants a sportier piece of footwear to play golf in.

The new version maintains the aesthetic of the original Hyperflex shoe, but comes in more colours this season.

The striking FlexGrid 2.0 exoskeleton upper, which is the shoe’s outer layer, has a rigidity that keeps the player’s foot secure in place throughout the swing, while also offering comfort. Inspired by the Boston Bridge, the cable structure of the outer layer is both sturdy and durable.

To ensure players’ feet feel fresh at all times, FJ use FineTunedFoam 2.0 in these shoes for 2016, a new midsole of a softer and lighter blend. You can feel the extra comfort as soon as you strap yourself in, and we enjoyed the bouncy feel they provide.

Hyperflex is one of the taller golf shoes on offer, which can take a while to get used to. However, this extra height in conjunction with the new cushioning system seemed to give us some extra spring through our swing, and the new OPS system, visible in the rear of the shoe, ensured we stayed stable at all times.

In both rain and shine, we were impressed with the grip on offer. Run your hand over the sole of the shoe, and you can feel the incredible amount of traction provided. FJ has used “Tornado” cleats by SoftSpikes, which are designed to be both durable and flexible.

When playing in the wet weather, we never endured the misery of wet feet, and the shoes come with a two-year waterproof warranty. They also have a decent amount of breathability, ensuring your feet don’t overheat during the warmer months.

We have been wearing these shoes since FJ’s press launch in mid-August, and have seen very little wear on them.

Importantly, they are also comfortable out of the box, negating the need for a couple of uncomfortable rounds to break them in.

We tested the shoes with the BOA Closure System and were impressed with the ease of use. Twist the mechanism a couple of times and the boot moulds to your foot in a way that is recognisably more secure than with standard laces.

FootJoy utilises its latest technology in the 2016 Hyperflex shoe, and it has created a sporty-looking product that excels in the performance stakes.