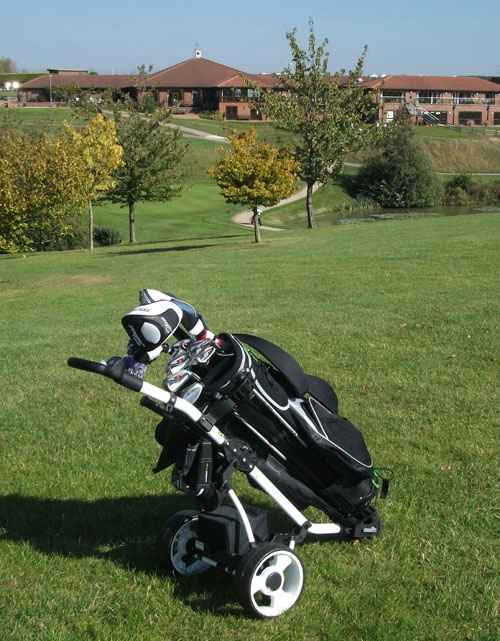 Many of us have discovered over the years that the battery of a powered trolley can often last longer than the trolley itself. If anything goes wrong with the 'engine' or, in the case of one of my fellow golfers, a wheel sheers off, it's the trolley that gets replaced not the battery.

Most trolley batteries are universal and will fit several brands of framework so I suppose it makes sense to make a product, offer it at a sensible price and advise that if you don't already possess the power supply, the battery costs extra.

Linden Golf's latest Fairway trolley boasts several improved features on previous models, but does not include, in the price of £199.99, the battery to power it.

As Paul Adams explains: "We started selling it that way as we had a number of customers who really didn't want a new battery which most other suppliers automatically include whether they wanted it or not."

I've used the Fairway over two rounds and it has coped admirably with the hilly nature of my local course. It drives powerfully up reasonably steep gradients and manages the flat quietly and efficiently, cruising along to match my stride.

It's well balanced but performs better with a cart bag strapped to it.  I had reason initially, more out of laziness, to strap a carry bag to it that I'd transported by train to Scotland, rather than transfer my clubs back to the cart bag. I soon discovered that the stand mechanism doesn't sit well on the base of a trolley and tends to slip to one side affecting the trolley's directional capabilities.

It was as if the trolley knew I'd be slicing my way around the course and under its own steam headed off in the direction of the right rough!

However, on my next sortie, with a cart bag firmly strapped in place using the adjustable straps, it ploughed a reasonably accurate furrow down the middle of the fairway.

As readers of my previous trolley reviews will know, I'm not a fan of distance control - the ability to send your bag off over 10, 20 or 30-metre journeys unaided to stop automatically. The Fairway has it, too.

I can see some golfers will appreciate such a facility and as long as they don't do it within my 360-degree peripheral vision, I don't mind!

The Fairway trolley is robust and powerful, has a two-year-warranty and its price will appeal to those who are battery hoarders and don't need to have a further power-point foisted on them.