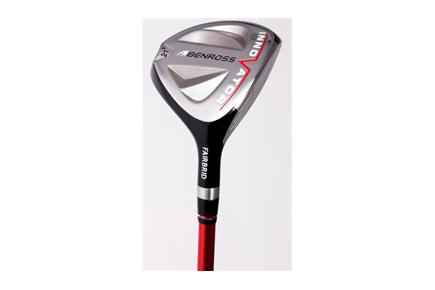 From the same stable as its bigger brother the updated Innovator X driver, this 21-degree model is equivalent to a 5-wood and would fit neatly between an orthodox 3-wood and the 5-iron in your set.

Looks: A scaled down version of the new Innovator X driver, because, says Benross, research tells us that by maintaining a similar look and shape throughout the Fairbrid family of clubs, golfers gain confidence and ultimately increased performance.

Feel/performance: I quickly adapted to the Fairbrid. It gave me confidence as I addressed the ball and didn't let me down during the round when I used it. Even off tight lies it sent the ball soaring on a high, floating trajectory to land softly and quickly. From the rough it was equally adaptable. The feel was more forgiving than a normal hybrid though less easy to shape shots than a fairway metal. however, this could be down to today's modern ball which is designed to fly straighter.