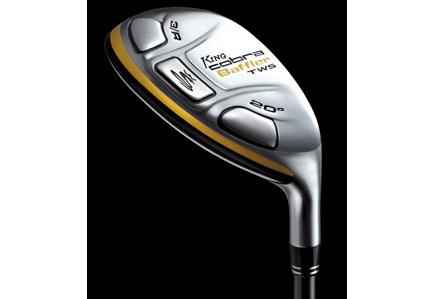 Cobra's Baffler TWS  (Triple Weighting System) is the latest in a long line of utility clubs bearing the name first inspired in 1973 by Thomas L Crow, a former Australian Amateur Open champion, who channeled his passion for golf into designing clubs.

The idea that sparked the Cobra brand came to Crow when he noticed that many American pro golfers purchased their clubs individually, often on impulse, hoping the new devices would improve their game. He saw an opportunity to tap that high-end market and started a small custom club business featuring the 'Baffler' wood, a club with a patented sole-plate that helped move the ball out of difficult lies by reducing drag and increasing lift.

Crow pioneered the idea of 'demo clubs' as the only way he could convince golf pros and retailers that the odd-looking Baffler worked. So he left them a sample for customers to try and hand delivered Bafflers to some of America's biggest country clubs to demonstrate its versatility. He even took to hitting golf balls from car parks to prove the Baffler wasn't just for using in bad lies.

Cobra has re-created the Baffler many times over the years, incorporating the latest technology to improve performance but essentially the product's principles remain the same - a versatile club for all types of situations that golfers face in every round. And while many top brands now have utility/rescue clubs in their ranges, the Cobra Baffler still enjoys a loyal following and has consistently been one of the best selling hybrids for nearly 40 years.

The Baffler TWS draws on the success of the award-winning, dual-weighted Baffler DWS, with Cobra engineers incorporating a Triple Weighting System to deliver a higher MOI and lower centre of gravity to help maintain stability of the club at impact while getting the ball airborne.

While I loved its predecessor, the Baffler DWS, I found it less forgiving on miss-hits than some other rescue-type clubs, but immediately found a soulmate with the Baffler TWS. I even seemed to impress golfers with far superior talent to mine with the accuracy and penetrating flight I managed to achieve with almost alarming consistency.

And on one recent trip to Portugal, I was even nicknamed 'Baffler Bob' such was my unerring performance with this easy-to-hit hybrid!

While the path of my self-made swing rarely allows for a high, floating trajectory, the Baffler TWS seems to respond to my coaxing it toward the target from a variety of lies and slopes and proves equally versatile from tight fairways and fluffy semi-rough.

With a head and face, slightly larger than the Baffler DWS, this latest version inspires confidence at address and for a mid-handicapper is a far better option than a long iron if the hazards between you and the flagstick need that extra carry.

I've even tried it around the green when confidence is at a low ebb with the wedge and while the feel is a little too firey, it's easier to control than trying to bludgeon a ball through the fringe with a putter.

The Baffler has a long heritage as the father of hybrids and continues to retain its versatility into the 21st century. There are many brand alternatives in this popular segment of the market but the Baffler TWS is fast emerging as the new benchmark. And with up to 14 options, in terms of loft and shaft flex, every golfer's bound to find something to suit.