The new Niblick combines the best features of a wedge, putter, iron and hybrid to create the ultimate hybrid scoring club. Gelback technology, which is a lightweight, visco-elastic, vibration-damping material that is placed directly behind the hitting area of the clubface and zip grooves. 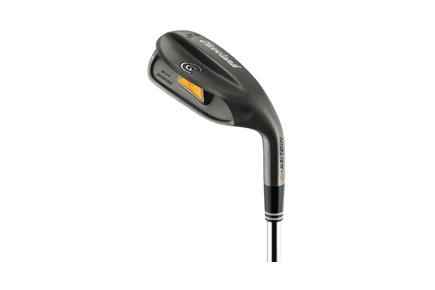 While I've never been the greatest fan of the chipper or loft putter (and I still haven't mastered using a hybrid around the green), the Cleveland Niblick, with its 36-inch shaft, is proving a really versatile companion.

As with most terminology associated with golf clubs, we have to give the Scots credit for the name Niblick. It comes from the Scots word 'nib' meaning nose and refers to the shape of clubs developed from the early long-nosed wooden clubs, which resembled more of a hockey stick than the clubface we know today.

Cleveland Golf are to be congratulated on the creation of this revolutionary short iron, which incorporates a classic concept with modern design.

The new gun-metal grey Niblick was made to combine the best features of a wedge, putter, iron and hybrid to create the ultimate scoring club.

But it's more than a chipper or a putter with loft, or an iron with hybrid looks. It has been specifically designed to improve scoring and enables a golfer, who maybe lacks confidence from 100 yards in, to hit four different types of shots, including chips, pitches, approach shots and recoveries.

The Niblick features Gelback technology, which is a lightweight 'visco-elastic' substance positioned directly behind the clubface, to soak up vibration and deliver a soft, responsive feel to the lofted approach.

I was cynical at first - after all I'm old enough to remember my first bunch of clubs as a kid, bought by my well-intentioned mother from an auction - with hickory shafts. A Niblick with a sharp leading edge and a rusty pock-marked face was among them and I enjoyed many happy hours chipping balls into a bucket in the garden.
Cleveland niblick
Wide sole of the Niblick 10

The 2009 version's face features Cleveland Golf's patented Zip Grooves, which not only channel debris away from the point of contact but generate greater spin for better ball control.

I'm yet to master the longer approach from 80 yards out, despite its wide non-digging sole, and I'm sure with practice I'll be able to blend three shots into two more consistenly, but I'm impressed with the feel and control it generates closer to the green.

With its confidence-inspiring thick top line and equivalent pitching wedge loft, it demands little wrist cock to pop the ball up gently and get it running towards the hole - a type of shot from 10-25 yards out I wouldn't feel as comfortable attempting with a normal wedge or even a 7-, 8- or 9-iron.

And from fluffy greenside rough, using the Niblick is almost considered an up-and-down gimme, by my mates, if only my putter hadn't been so cold lately. But that's another story...