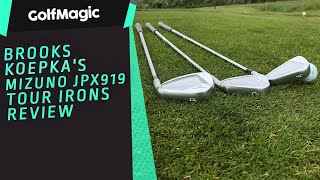 Stunning to look at, consistent yardages, pure feel
Not for the player seeking forgiveness
Our score:
Overall:
4.5
PRICE: £135.00 YEAR: from 2019

With Brooks Koepka proving to the world that he's the man to beat in Majors right now, we wanted to test out some of the tools in his bag. His iron play has been a spectacle of beauty as of late, pin seeking on some of the toughest courses around, but which irons does the big American use?

Well Koepka is one of just three players in the top 20 in the world, alongside Tommy Fleetwood and Paul Casey, who remains a free agent, meaning he can pick and choose whichever clubs he wants. Koepka could be making millions on top of millions if he signed with one of the top brands, but being a free agent is clearly working for him.

Mizuno has always been known to produce stunning irons and the latest irons from the brand are no different. The Mizuno JPX919 Tour irons are the sticks Brooks Koepka used to win the PGA Championship just a few weeks ago and GolfMagic can see just why he loves them so much...

The JPX919 Tour's are easily one of, if not the, best looking irons on the market. Mizuno have a knack for perfecting the blend of simplicity and beauty. When you look at the JPX919 Tour, there's nothing about it that makes it really stand out, yet it just looks phenomenal. Simple, clean, modern, there are so many words you can use to describe these irons, but very few will argue that these irons don't look amazing.

Not much needs to be said here. The saying 'nothing feels like a Mizuno' exists for a reason. Flushing these out the middle felt pure and perfect. You will easily know when you haven't caught one quite right, but you expect that with the JPX919 Tour's as they're not built for forgiveness.

The most consistent iron we've tested this year. Like we said in the video, it's very common to be testing an iron and you hit a few freak shots that go another 10-15 yards than what you were averaging and if that happens on the course you're not going to be too happy if it means sailing over the green. With the Mizuno JPX919 Tour irons, you get a consistent yardage, as long as you're swinging it well of course.

Another incredible iron produced by Mizuno. The JPX919 Tour irons offer a combination of beauty and performance for the better player. If you're a big fan of these irons but you need more forgiveness, then there is also the option of the Forged model and even the Hot Metal model which is a game improvement iron. Mizuno has ensured that all types of players can benefit from the stunning looks and high quality of the JPX919 iron. With an RRP of £135 per iron, they are on the premium scale of irons this year, but you certainly get what you pay for.