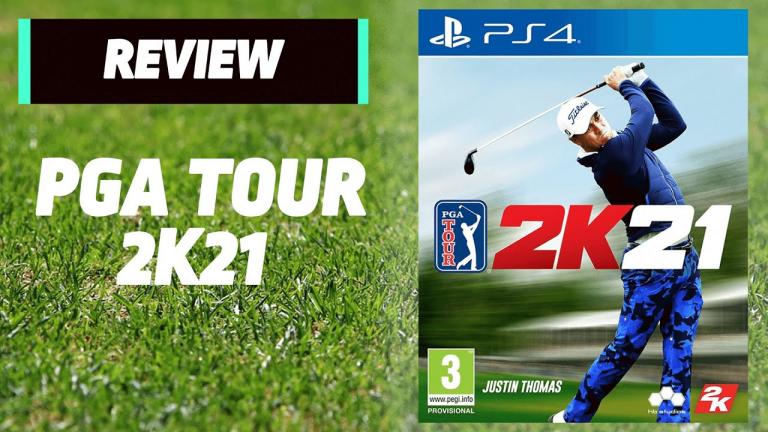 Creative features, in-depth career mode, able to play some of the best courses in golf, fantastic My Player feature, an addictive game for golf-lovers
Putting is very difficult, graphics and swing motions need improving, a little rough around the edges
Our score:
Overall:
4
PRICE: £39.85 YEAR: from 2020

Now we might not be gamers or an Esports channel, but we cover everything golf, so when PGA Tour 2K21 was released, we just had to get our hands on it and see if it was worth the wait.

We’ve got to grips with game and a few of its features and will be telling you why PGA Tour 2K21 is a must have game for any golf-loving gamer. Watch our review in the video below:

So PGA Tour 2K21, the first PGA Tour game that is a must have since 2014. What makes it so special? There are other golf games out there such as ‘The Golf Club’ which is quite similar to this new release, but what make PGA TOUR 2k21 so great is how you can play on it for hours and hours, for endless fun.

You’re immediately greeted with the option to take lessons when starting the game, which is a great bonus for us novice players. The experienced players among us may find this trivial, but it’s clear that these lessons are not only helpful, but show that this game is not going to be easy. It shows you how to hit drivers to short game shots and brings that nostalgic feeling of playing a Tiger Woods video game on a pixelated screen a decade ago.

Now where this game really starts to level up is the 'My Player' feature. You may be sitting there,shouting at the screen saying ‘PGA Tour 2007 had this feature!’. Well, yes it did. But certainly not this much detail. The My Player feature reminds me of the extremely succesfull EA Sports FIFA franchise and the ability to play Pro Clubs with a player that you can morph to look like yourself, down to that scar you have on your wrist from 2004. From head to toe, you can kit your player to look the part, or play like a hacker and it led to hours of fun for the GolfMagic team.

Once the player is created, you are pushed towards the Career Mode, which is said to be the main part of the game. The online fanatics will be grimacing right now I’m sure, as offline playing can sometimes be rather boring. Don’t worry, this game has a variety of online features so you can play a round of golf at a variety of courses such as TPC Scottsdale and TPC Sawgrass with your friends, for those rainy days.

You can start the Career Mode from a variety of different points, but we think it’s best to start at the most amateur level to get the most enjoyment out of the game. This is the Q School Tour final, where by finishing in the top 50, you get entry into the Korn Ferry Tour! This part was relatively straight forward but it did lead us to say again – this game is hard. Long gone are the days of Wii Golf shooting 58 on a par 72 with a flick of the wrist. This game requires precision, patience and practice. There are difficulty modes (similar to other sports games) that can make this game easier of harder for select players.

Putting will take hours to master, and this isn’t surprising given the quality of previous games. Putting has always been a controversial feature in recent golf video games. It feels like you can either hole everything from 60ft or you have 54 putts a round, there’s no in-between. So far, this feels pretty spot on in terms of difficulty level, and you can get the hang of it after putting some reps in.

The gameplay itself is not at all boring and you can tell that the developers have really thought out the journey to take your player. It’s fun, fast paced and never really a dull moment. If you’re not a fan of career mode, and want to try something different, the course designer feature is superb. We spent hours creating spectacular to downright stupid golf courses and find this a really cool add-on for a game that already ticks a lot of boxes.

So, overall thoughts of this game. If you were expecting a golf game to be released and be perfect, after the seven year hiatus of a worthwhile game, you are mistaken. This game obviously has some things you can mention that are not as good as FIFA, Madden, NBA etc. But, for a restart of a franchise that was in need of a refresh, this game ticks all the boxes. You can have endless amounts of fun on this game for hours on end and that applies to any level player.