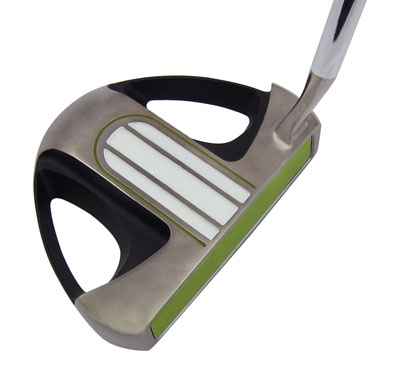 Forgan has built a reputation as one of the longest-established, continuously available brands with its roots deep in the traditions of St Andrews, the Home of Golf.

More recently it has taken on former US Masters winner Ian Woosnam to carry its name on the European Seniors Tour and help promote the value of its wide range of golf equipment.

For example, this week he's competing in the British Seniors Open at Walton Heath in Surrey, a course with similar roots to those which Forgan holds in such regard.

But while many of the professional players in action this week have lucrative contracts to play certain equipment, Forgan continues to produce quality clubs aimed at those of us for whom spending in these times of austerity has to be tightly controlled.

So full marks to them for producing the Forgan TP-1 putter - part of its green and gunmetal grey Tour Precision range.

I used it in a recent round and was impressed both by the balance and feel of its mallet head.

It behaved in a way that many would have paid handsomely to reproduce, such was the way it handled greens slowed by recent deluges in terms of both consistant distance and accuracy.

With its wide green insert face, heavy semi-circular head it was both forgiving and stable at impact.

Three lines behind the face, reminded me of a compact version of the Rife alignment aids and helped to ensure easy aiming, while the double kink in the shaft above the heel-inserted hosel kept the solid solidly planted and the ball clearly in view at address.

Having performed so well I fully expected to re-check its details and discover a price tag in excess of £60.

At £29.99 and with its own head cover, it outstrips in my opinion, most of the budget putters available on the market.

While I have always been an ambassador for spending as much as you can afford on a club that is responsible for nearly half the shots in your round, in the case of the Forgan TP-1 putter I'll make an exception.