Shot Scope V2 review: added GPS takes this product to the next level. 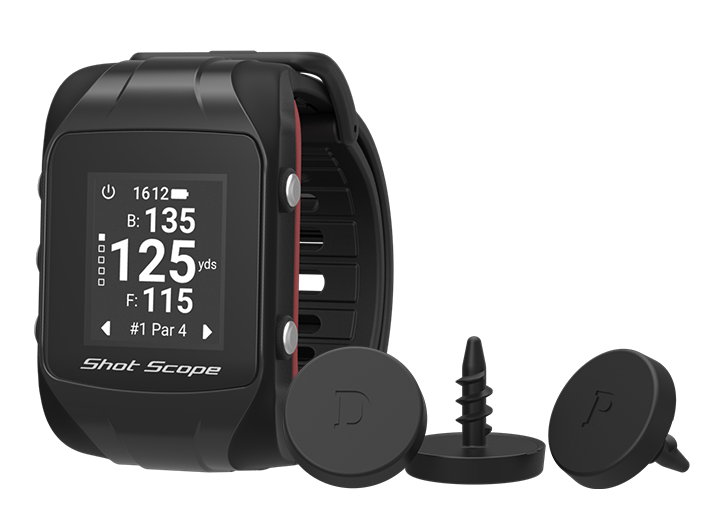 Tested the new @shot_scope V2 at @hadleywoodgc today. Review up on the site soon!

The Shot Scope V2 follows the successful launch of the original Shot Scope product, with the brand adding GPS to the package and also learning from some of the issues with the original.

Shot Scope V2 is a performance analysis tracker, offering Tour level feedback in an easily digestible fashion, and in 2018 it comes with the GPS option built in.

How does it work?

Golfers screw small tags into the butt ends of their clubs, which then relates to a watch worn by the player.

Users download courses on the Shot Scope app, and then sync it to the watch before playing.

There are three playing modes to choose from - GPS, Pro (just tracking), or GPS plus Pro.

To charge, a USB cable is provided.

There’s no getting away from it - the watch is fairly chunky. The overall aesthetic is an improvement on the original product, but it’s still wanting in this department.

Users are offered front, middle and back yardages, and yardages to hazards will also be available.

We tested it alongside other GPS watches, and found it to be accurate. The yardages change quickly, which is important as you don’t want to be waiting at your ball as the watch catches up.

One pro we noticed straight away is the strap is more sturdy, and looks like it can really withstand some heavy duty wear.

The LCD display is bright and shows the numbers effectively, and it’s relatively easy to navigate around once you know what you’re doing. The GPS also picks up the link quickly, so you don’t have to wait around on the first tee.

Once playing, a big pro with the Shot Scope system is there is no in-play tagging, which messes with pre-shot routine and is just a bit of a faff.

All the work is done in the background, until you get the ball in the hole. Then, the new system prompts you to mark how many putts you have made by the hole, so the daydreamers don’t forget (me).

This is an important step, as it logs the exact location of the hole, offering you exact short game statistics.

After your round, golfers sync the watch with the app - which takes seconds - and can view their score and their performance.

It’s a good idea to just quickly check everything is logged correctly - I did have a couple shots that weren’t quite right. It’s easy to edit those shots, however, or add in penalty strokes etc. It’s also key to let the app know which tees you are playing from.

In the performance zone, players will see the distances they are hitting with each club, while play is broken down into tee shots, approaches, short game, putting, and personal records.

The system really drills down into these numbers, showing you how many shots you missed left from the tee, how often you end in the bunker on an approach shot, your putting inside six feet and a lot more.

The vast majority of the data was very accurate, although one or two wild ones do get thrown in there, so a quick edit post round is needed.

The battery is so-so. It lasts for a round, but wouldn’t be able to do much more than that. Golfers should also be careful to turn the watch off after charging, so you have a full charge when you get to the first tee.

Adding the GPS to the system takes Shot Scope V2 to the next level. Not having to tag while playing is a big pro, and players are shown the their data in easily digestible nuggets.

There are improvements in other areas also - a better strap, and the system prompts you to log number of putts.

As will all these systems, there are still a few areas that have issues. However, none are major problems that would put us off using the product.

The Shot Scope V2 provides the nuts and bolts, with the bells and whistles thrown in as extras.