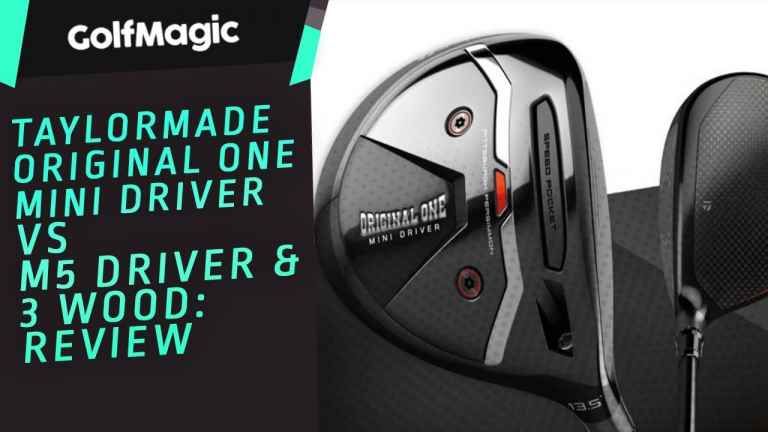 The M5 and M6 drivers have impressed everyone in the golf industry this year. The new speed injected twist face is something we have never seen before, but the Original One Mini Driver offers something very different.

The Original One Mini Driver was released to celebrate 40 years of TaylorMade, with the design looking similar to TaylorMade's first 'Original One' driver, but with the modern technology they've spent years improving. The Mini Driver is not a direct replacement for your driver, it's not designed to go as far as the M5 or M6, it's designed to offer you a club that gives you more distance and power off the tee but with the control of a fairway wood. Check out our video below, as GolfMagic's Jack Seddon puts the Original One Mini Driver to the test...

We were really impressed with the design on the Original One Mini Driver. It's a sharp and modern look, something you expect with all TaylorMade products, but it still has that classic edge to it to remind you of the brand's early days. For a mini driver, it exceeds visual appeal in every possible way, TaylorMade has packed all the technology you expect a driver to have in a small 275cc head. At address the mini driver fills you with confidence. It's big enough to feel like you can give it a good whack, but the smaller head gives you a sense of comfort and control.

Off the tee, the Original One Mini Driver offers a very responsive feel and sound. It's not the same sound as the M5 produces (I don't think any driver will ever beat the sound of that club) and it's definitely not as loud as a driver. Shots hit out of the toe and heel can be felt, but due to the confidence levels this club provides, most shots were coming clean off the middle.

The mini driver does what it says on the tin and to a very good standard. You'll see on the SkyTrak results that it wasn't going as far as the M5 driver, but further than the M5 3 wood, exaclty what you would expect to happen. The main factor for me during the test was dispersion and as you can see from the results in the video, the Original One Mini Driver offers you an option off the tee that provides plenty of distance with a much tighter dispersion than a driver. The use of Twist Face and the Speed Pocket help with producing fast ball speeds across the entire face and the Speed Pocket also gives you a liitle more help if you hit the Mini Driver off the deck. Personally, I would only use this club off a tee as I think the head is still slightly too large to be using it as a fairway wood.

The Original One Mini Driver certainly isn't for everyone. If you are a comfortable driver of the ball then there is no point you even considering this club. But if your driver is costing you a few shots every round, but you're comfortable with a fairway wood, then definitely give this club a go because it could be perfect for you. Like I said in the video, I wouldn't recommend carrying the mini driver AND a 3 wood as the distances are too close, but the mini driver with a 5 wood could be a deadly combination. With an RRP of £369, you're not going to break the bank with this one either.