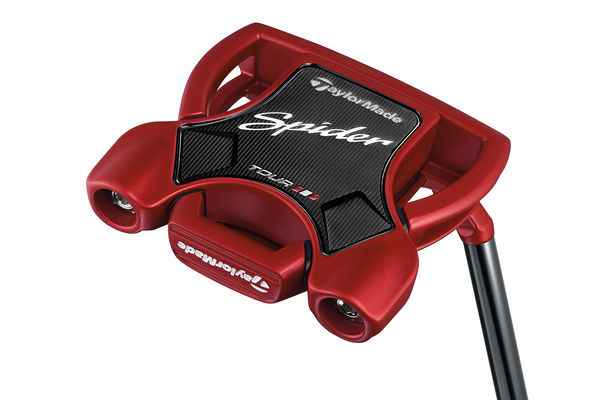 TaylorMade's greatest putter of all time. It's not just us that think that, but the world's best too.

Compact shape, very forgiving for a Tour model, lovely soft, silent feel, great for distance control
Not the cheapest new putter out there, not the best alignment aid
Our score:
Overall:
5
PRICE: £250.00 YEAR: from 2017

Should we even bother to continue with this review?

Never has TaylorMade seen such a popular putter in its ranks, and we can see exactly why following three months of extensive testing with this red-hot mallet.

To give you some idea of the success of the new TaylorMade Spider Tour, it's been the number one putter model on the PGA Tour for 17 of the last 18 weeks.

First things first, the Spider Tour catches the eye in its red lick of paint. Dustin might be using the all-dark version, but most of the others using it on Tour have opted for the red model just as Day did when he first requested that colour on his black Itsy Bitsy Prototype which he won the US PGA Championship with in 2015.

It might seem like a large head on first look, especially for a Tour model, but it's actually got quite a compact shape. There are definitely bigger TaylorMade wands out there - just ask Brian Harman and his Spider OS CB.

The Spider Tour putter thankfully has a high moment of inertia (MOI) which means it has ample forgiveness behind it due to its resistance to twisting at impact and especially on off-centre hits. Yup, the world's best need some help you know. 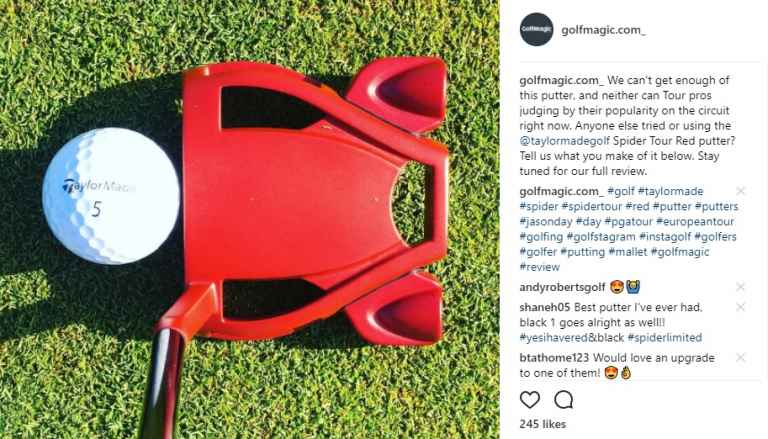 There is no alignment line running through the middle as such, which may cause a few niggles among interested punters, but McIlroy has already made the instant switch to include one on his. Because he can. And he's also got Rors stamped on it. Because he can.

US OPEN: RORY MCILROY TO USE TAYLORMADE SPIDER TOUR RED

The cutaways down the side however create a nice framed middle slot to align the golf ball to the hole.

There are definitely better putters out there to help you with your alignment, but if you're a competent enough putter then you will have no issues with lining this one up. If you fancy a more helpful aid on your TaylorMade putter, you'll likely prefer the Spider Limited or Tour Platinum.

One of the best aspects to the Spider Tour design is that its face (black) is a different colour to the head (red) and this certainly helps with address position and being able to see the leading edge.

There is a lovely stable feel about this putter, especially on short putts. This is down to the discretionary weights situated in the heel and toe.

We've noted a consistent soft, silent 'pop' sound at impact thanks to its aluminium 'pure roll' insert, as the ball rolls end over end without skidding, and incredible distance control on putts outside of 30 feet. The feedback you receive from the sound at impact is ideal.

While we have since entered the pits to change its Winn Medalist pistol grip to our preferred SuperStroke, we could not fault the standard grip model. Grip is very much a personal preference, which let's face it is key to feeling comfortable over the ball.

Given this is a heel-shafted putter with a short slant neck offset, we can see this one appealing more to those with an arc or slight arc to their putting stroke.

The beauty of this putter is that not only does it look and feel superb, but it rolls remarkably true and is about as forgiving as they come for a compact mallet design.

Quite simply, TaylorMade's greatest putter of all time. It's not just us that think that, but the world's best too.

We adore its compact shape, its soft, silent feel and true roll at impact, and it's forgiving MOI benefits to help you hole more putts.

Yes, five of the world's top 10 right now are TaylorMade staff players so you would expect them to be using a TaylorMade putter, but there are many different models in their line and the fact they've all selected the Spider Tour speaks volumes.

The likes of Odyssey, Scotty Cameron and PING may have hogged most of the putting limelight down the years, but TaylorMade - just as it is currently doing with its new TP5 and TP5x golf balls - is now proving it has so much more to offer than just metalwoods and irons.

If the Spider Tour Red putter can cure Sergio's putting woes and help him win a major championship after all these years, then surely it's worth introducing one to your own game?

Yes it's pricey at £250, but can you really put a price on holing more putts and eradicating those three jabs - much of that decision will rest on how seriously you take this beautiful game.

If you class yourself as a mid to low handicap player and are in need of a real confidence boost on the greens this season, we could not recommend the Spider Tour Red any more.

If you take the plunge for a Spider Tour putter, let us know how you get on by leaving your comments in the reader review section on this page, or by joining us on Facebook, Instagram, Twitter and YouTube.