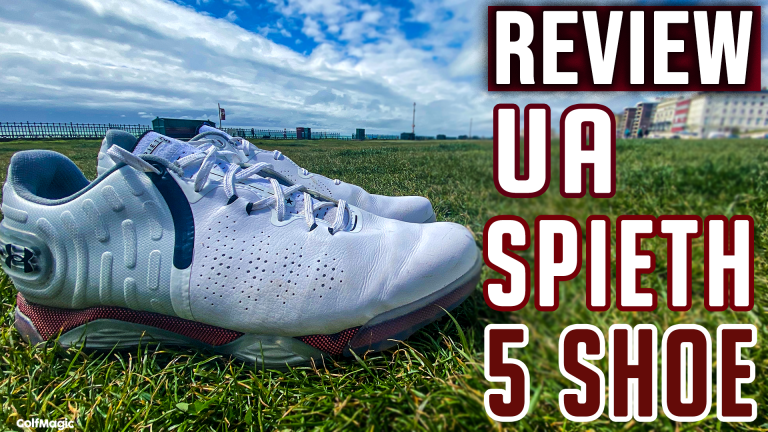 When it comes to golf apparel and shoes, Under Armour is one of the best brands in the game and the new Spieth 5 golf shoe is set to rival other top brands such as adidas Golf and Nike.

It comes in at a premium price tag of £169.99, but golf shoes should be seen as an investment, not a short-term solution.

The new Spieth 5 SL shoe is built to generate more power through your stance, so we decided to put Under Armour's latest golf shoe to the test to see how well it performs.

Putting data driven design and performance above all else, the fifth iteration of Spieth’s signature golf shoe has the comfort and feel of a spikeless, with all the traction and power of a spiked. Through UA’s own innovation in spikeless outsole construction – and the introduction of a “Fourth Dimension of Traction” – you’ll swear they’re still spiked with the same comfort and incredible traction, even in wet weather.

Developed in conjunction with leading bio-mechanist, and foremost authority on the foot's behaviour during the golf swing, Jean-Jacques Rivet, Under Armour has built its own proprietary traction technologies – Rotational Resistance in 2016 followed by Horizontal and Vertical Traction in 2019.

This fourth dimension of traction – Interior Traction – is achieved through the introduction of a new 3D moulded footbed that features an additional wrap over the medial side and top of the foot. This wrap eliminates ‘gapping’ between your foot and the shoe from the inside to create a fit that is tailored to your specific foot shape, reducing undesirable movement through Internal Traction.

The new Spikeless outsole design uses a durable and lightweight TPU with injected rubber spikes in specially targeted areas so players will feel no shortage of lockdown traction through the golf swing.

Crucially the outsole also features flex channels that tap into valuable performance insights from biomechanics to increase traction, stability and the ability to transfer power from the ground into the swing.

This is most notable in the forefoot where Under Armour re-designed its existing flex channels to decouple the big toe, allowing it to remain grounded longer into the swing and providing a major source of enhanced stability in the golf swing.

Comfort is a given, thanks to the use of a full-length application of Under Armour’s proprietary UA HOVR cushioning platform, giving golfers comfort and energy return for the swing, while keeping as low to the ground as possible, just as Jordan himself asked for.

The new Under Armour Spieth 5 SL golf shoes performed extremely well on the golf course, as you'd expect with a golf shoe from this brand.

With golf shoes, it's important that you remain comfortable from the very first hole until the last and that's exactly what we felt with the Spieth 5's.

As soon as we put the shoes on, they felt extremely comfortable, with that 'worn-in' feeling that usually takes a few rounds to produce.

The "Fourth Dimension of Traction" that the brand shouts about was something that we wanted to focus on and try out during the round and although the grass had some moisture on the day of testing, the spikeless shoes performed perfectly.

We are yet to try them during really wet weather, but we believe they will still perform at a very high level due to the technology used by the brand and how good they felt during thr first test.

The price tag of £169.99 means these shoes certainly sit on the premium side compared to other shoes on the market, but with the unrivalled comfort and spikeless traction they offer, you certainly won't be disappointed.

That being said, if you're going to spend that much on a pair of golf shoes then it's important they last and you're not shopping for a new pair in 12 months time. We're not able to tell you how durable these shoes are just yet, but we will continue to test them throughout the year and provide you with an update.