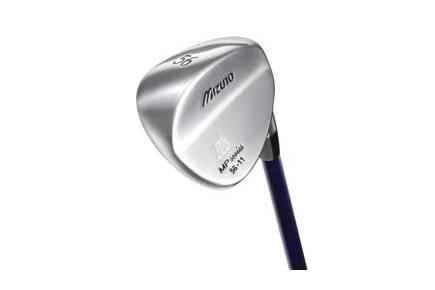 Mizuno has delivered a fresh-looking set of scoring clubs

The new R&A and USGA rules affecting the grooves on our wedges will not apply to most of us as mere handicap golfers until 2024, though players on the major Tours are already switching to specially-made wedges in anticipation of the Rules being introduced almost immediately - in January 2010.

Mizuno is one of several manufacturers launching new wedges which, while not conforming for Tour use, can still be manufactured until the end of 2010. Here we continue our first look at more of the latest models.

Mizuno has always produced pretty good wedges, but they haven't always matched up to the looks and feel of the MP irons that the better players prefer, with feedback from Tour players, especially that Mizuno's previous R and T Series of wedges were a little too big for elite player's eye. Mizuno has taken the criticism constructively and delivered a fresh-looking set of scoring clubs.

With the observations of its best players ringing in its ears, Mizuno has shrunken its previous wedges by few percentage points to produce a more user-friendly blade that fits the eye of better players. While the clubface has been thickened tad, with a marginally wider top line the sole has been bevelled down to keep the leading edge tight to the ground.

With the groove rules for clubs with more than 25 degrees of loft changing in January (for Tour pros only), every major brand has had its hands forced by the rule-makers into making changes to their wedges - and that at least in the grip of the world's best players, they spin less.

Using a new custom-milling tool, Mizuno's engineers have developed Quad Cut Grooves, which are more v-shaped and with rounded edges, to ensure that the groove width, depth, draft angles and edges are right on the legal limits.

Out on the short game practice area, the T-10s feel extremely solid, and as new clubs - hot from the factory - produce plenty of action around the greens when using a three-piece performance ball. Easy to align and to sit squarely behind the ball, the clubs give you the confidence that you can go after a shot without fear of digging in to the turf or thinning one off the leading edge.

The smaller head profile is not an issue and only adds to the clubs' shot-making capabilities. While we've got many years to make the most of the current 'aggressive groove construction' of these 2009 MP T10 wedges, it will be fascinating to see how Tour pros adapt to the conforming MP T10 wedges made exclusively for them.