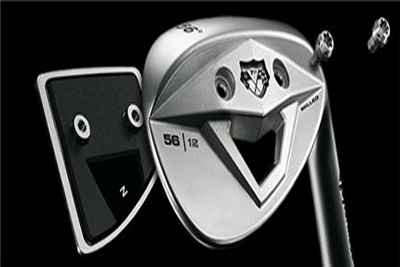 A wedge with a face plate that screws into the back so that it can be replaced when the grooves wear down – ingenious maybe, but sounds a bit clunky don’t you think?

Not if you speak to the top TaylorMade staff players. Retief Goosen likes it because of the extended life span of the club as a whole. He grinds metal off the hosel so that it suits his eye and replaces the grooves every four weeks, so that it feels like he’s always playing with a new club.

Darren Clarke says that it gives him more spin round the greens. But for the amateur player, you can’t help seeing this as something of a gimmick, and an expensive one at that.

The club retails at £119, but a new face insert will cost £39 a time (okay, if you're a Tour pro who gets them for nothing but not so good for an amateur, though it's unlikely that you'll change the face as frequently as The Goose). In addition, consider how many amateurs out there have thrown wedges away because the grooves have worn down!

Looks: Wedges are very personal, but this has a nice head shape and a good feel, plus it sits well behind the ball. You can’t tell that the club has an insert when you’re addressing the ball, but up close you can see the join and despite what the makers claim, the plate doesn’t fit absolutely flush.

Feel/performance: I’ve heard it said that the screws in the back affect the bounce of the club, but having tried this club from various lies, bunkers through to tight fairways, I haven’t found that to be the case. There’s quite a springy feel off the face and the clubhead felt on the lighter side through impact.