It's time for Europe's ageing army to make way for new blood in what could be an era of dominance for the United States. 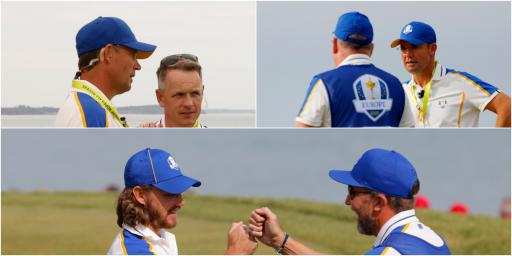 Team Europe's Graeme McDowell tweeted about potential names for what would have been the greatest Ryder Cup comeback ever.

Wonder at Whistling, he questioned - but all they got was a slaughter at the Straits as they sank to a brutal 19-9 defeat.

Now the inquest has well and truly begun as the normally dominant Europeans seek to find the answer to a riddle they usually have solved.

Padraig Harrington will be one and done while Lee Westwood seemingly hopes to be the only player ever to defy father time and carry on.

Westwood can keep his head held high knowing he has been a strong part of so much European Ryder Cup success.

But he should, in his words, head for semi-retirement and let the likes of Italy's Guido Migliozzi usher in the new period for Europe.

It is not all doom and gloom for Europe. A heavy defeat was predicted but whether the United States would truly deliver wasn't.

Here are five things Europe need to do to ensure they have a fighting chance of winning back the trophy in Rome.

Europe need to get away from the notion a captain is only chosen because it's their turn.

Nick Faldo was a prime example of this and he was chosen simply because he is Sir Nick.

While others treated it like a full-time job. We're talking about Paul McGinley here.

The captaincy should stop being treated as a lap of honour for a hall of fame career.

Pick who has the time and truly wants to do it instead of juggling their playing career, too.

The qualifying system from the European Tour is a strange one as players get double points from the middle of may.

This, of course, means players can sneak in to the side with a win and then coast or cling onto their spots.

Westwood hung onto the final place despite what he would admit was an under-par performance in his last tournament before the Ryder Cup.

He shot in the 70s on his final round at the BMW PGA Championship at Wentworth and still hung in there thanks to Shane Lowry fading slightly.

Westy was without a top-20 finish since early March but he was still selected. That is not to do his season a disservice though, but it is perhaps a flaw in the system.

Make the most of home advantage

This goes without saying but the European players in with a shot of making the next side need to take the opportunity to play at the venue in the next couple of years to familiarise themselves.

Bring back the Seve Trophy. That was an event that pitted the best players from Great Britain and Ireland against continental Europe. It was last held in 2013. It would give "rookies" a chance to play in a big tournament before the Ryder Cup.

Use stats, but don't rely on them

In the world of sport there are now teams of researches crunching the numbers to inform managers and coaches about their decisions.

Golf is no different and there were murmerings in the European camp that Harrington had an over-reliance on them.

On paper Jon Rahm should have obliterated Scottie Scheffler but in the end the world's best was resoundly beaten.

Stats should used to inform, not decide.

NEXT PAGE: WHAT DID TIGER'S FAMOUS TEXT MESSAGE SAY TO TEAM US?