After humbling defeat, is Lee Westwood set to become the NEXT Ryder Cup captain?

Westy appeared to be in two minds immediately after the defeat at Whistling Straits - but should he head for semi-retirement? 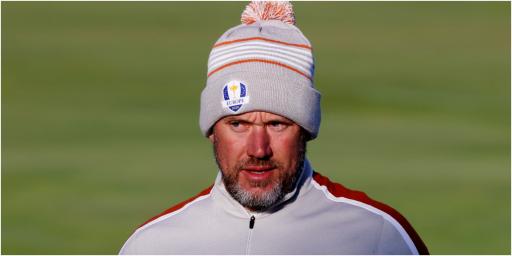 If this truly was the last time Lee Westwood pegs it up at the Ryder Cup then what a fitting end it was.

With his son Sam on the bag, an inspired Westwood came from behind to win three out of the last four holes on the Sunday singles.

Snatching the point off Harris English was futile as the Europeans were slaughtered 19-9, the biggest defeat for either side since the 1970s.

But what now for Lee Westwood? He appeared in two minds about whether he should carry on or head for, as he called it, "semi-retirement."

Westy, 48, equalled the record for most appeareanes - 11 - since 1997 and was the oldest member of Padraig Harrington's side.

"I hate this tournament. It makes you so emotional, but that's what makes it great as well. Everybody knows when they tee up in the links-style golf course, Ryder Cup, it's a lottery," Westwood said.

"You have a chance of winning but it's not guaranteed. Like roulette. But they are special moments out there. You know, we get to represent Europe out there this week. It's a big place.

"If you haven't got pride and passion, then it's not for you. Don't even bother turning up."

Lee Westwood all but suggests to me that he’s not ready to captain Europe at the 2023 Ryder Cup pic.twitter.com/f59SDZ8UyG

Westwood always had pride and passion just like Ian Poulter but whether or not he will have the ability will be scrutinised.

They had written him off to make this side and, he was touted as a potential captain to succeed Thomas Bjorn.

But will he want to do it?

It's almost a full-time job and Westy still has the passion to stay in the gym and keep fit, he said.

An emotional @IanJamesPoulter after his Singles win.

"Listen, this match I played, it might be the last match I've played in the Ryder Cup," Westwood said.

If this is the end for Westwood, he can leave with his head held high.

He departs as a member of seven victorius sides.