The Olympic champion was in good form as team US delivered one of the funniest media conferences ever after their Sheboygan heroics. 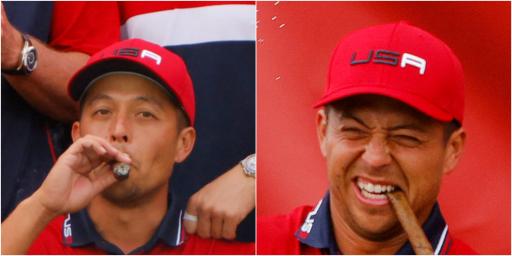 If you're European you could be forgiven for switching off your television as the United States romped to an emphatic 19-9 Ryder Cup victory over Europe.

But if you did you arguably missed one of the greatest 30 minutes in Ryder Cup history as Team USA capped off their victory in hilarious fashion.

It all started when Xander Schauffele came into the room puffing away on a cigar and boasted: "For me, personally, I had no idea we had media after all of this, so we're going to enjoy this one for now, and collect ourselves shortly after."

It wasn't immediately clear just how much beer and champagne had been drunk but by the answers - or lack of clear answers - indicated the Americans had certainly drank more than their fair share.

Steve Stricker seemed to be the only member of the team who wanted to provide a thoughtful answer, while his young rookies joked and hugged each other and chimed in with amusing comments.

Dustin Johnson almost swore when asked whether he could keep up with the partying they were about to embark on and suggested he wouldn't be discouraged from sharing a bed with Collin Morikawa after Tommy Fleetwood and Francesco Molinari did so after their Le Golf National performance.

Jordan Spieth goaded Bryson DeChambeau for some of his behaviour this season that has seen him snub talking to the written media.

DeChambeau asked: "Why did you single me out?"

"Because you haven't been in media for a long time," Spieth replied, to the laughs of his team-mates and the throng of press.

All the while, Schauffele was still smoking his cigar.

"Attaboy Strick," he said of his captain.

To cap it all off, Justin Thomas encouraged a piece of harmony between Brooks Koepka and DeChambeau.

How much of their feud was actually real and how much it was just for the cameras is only known by them.

JT said: "I think before this is all over we should have Brooks and Bryson hug in the middle of the room. To prove how much of a team we are, they are going to hug."

The pair obliged, and walked off into the Sheboygan night to party.

By contrast the Europeans showed humility and grace in their defeat.

All laughing on stage after a private joke send them into hysterics.

There were also some tears.

"They even lose better than us," was one of the comments from social media users.

“One of you will betray me.” pic.twitter.com/6gtSWsUgbR