The United States cruised to an early lead on day one of the Ryder Cup after Tiger Woods apparently sent the team a message. 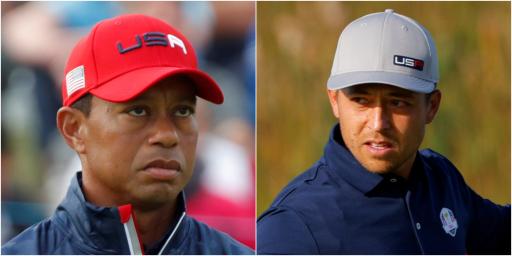 Tiger Woods may not be at the Ryder Cup but he's already made his presence felt and is making a difference.

That is what Xander Schauffele had to say after the United States cruised into an early 3-1 lead on the first morning of the 43rd Ryder Cup.

Schauffele teamed up with Patrick Cantlay and thrashed the European duo of Ian Poulter and Rory McIlroy 5&3 at Whistling Straits.

They stormed to a five up lead through the first five holes as Poulter and the Northern Irishman struggled to find any momentum.

Woods is watching from his Florida couch and most definitely fist-pumping every holed putt his United States side drains.

At least that's what Schauffele said, who told the media after claiming a point: "We're all square, we keep pushing.

"We got a nice message from Tiger last night, obviously we're not gonna reveal what it said.

"But Pat and I knew, we referred to it a few times today and we knew what we needed to do.

"We knew he was fist-pumping from the couch.

"Whether he was on crutches or not, he's as fired up as any back at home so it's nice to have his support.

"There's no better role model, no better leader and (he's) just somebody you can always learn from.

"I saw him last week at home and just picked his brain on Ryder Cup and applied that here today."