Bryson DeChambeau says "SOMETHING FUN IS COMING UP" with Brooks Koepka!

Bryson DeChambeau leaves us on tenterhooks after his comment about Brooks Koepka at the Ryder Cup. 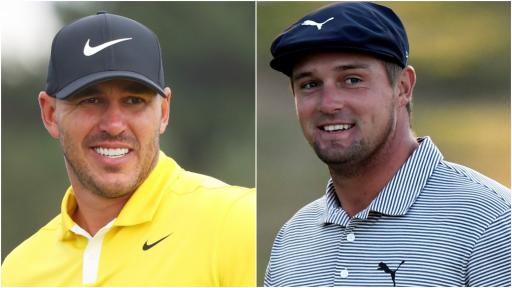 Bryson DeChambeau has revealed "something fun is coming up" between he and Brooks Koepka as he spoke to the media ahead of the Ryder Cup.

DeChambeau's golf coach Mike Schy had earlier in the week spoken about the American's desire to end his feud with Koepka, and the man himself made that clear during his press conference on Tuesday.

DeChambeau's Ryder Cup record leaves much to be desired at 0-3-0 following his debut appearance at Le Golf National in 2018, but the 2020 US Open champion is an entirely different beast this time around.

The PGA Tour's biggest hitter, who will also be competing in the World Long Drive Championship the day after the Ryder Cup on Monday, is hoping to showcase exactly what he can do for the game of golf at Whistling Straits.

DeChambeau will certainly have his eyes on driving a number of reachable par-4 holes this week, and there appeared a glint in his eye about such a prospect during his interview today.

RELATED: BRYSON WANTS TO END HIS FEUD WITH BROOKS

"Whether people like it or not, that is their interpretation of it, but I will keep providing people with the best possible entertainment I can," said DeChambeau.

"It's not about changing perception this week, it's about getting the crowd behind us and helping rile us up to win the Ryder Cup.

He added: "There will always people saying things about me no matter. Even if i make a hole-in-one on every hole, people will always says things.

"I understand people have opinions, I respect them and I see their points of view, but this isn't about me, this is about the team going on to win the Ryder Cup."

NEXT PAGE: PADRAIG HARRINGTON AND PHIL MICKELSON STAR FOR U2 AND OASIS IN HILARIOUS PARODY