"Was I a major drug dealer? No. Did I drive fancy cars? No. That doesn't make it any better." 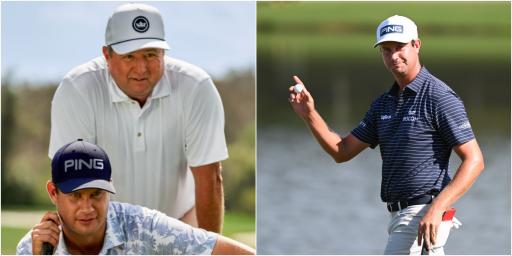 The caddie who will be on the bag for one of the rookies of the American team at the Ryder Cup has had an interesting life.

From deep into the cocaine business in the 1990s to the PGA Tour caddying for former Open champion Mark Calcavecchia.

Meet Eric Larson, the former drug dealer who went from earning thousands to earning pennies while serving his time behind bars.

Larson will be caddying at the Ryder Cup in Whistling Straits for Harris English, who was one of Steve Stricker's six wildcard picks.

The caddie has had an interesting life to say the least as during his time behind bars he reportedly struck up a friendship with Jordan Belfort.

Belfort's life was brought to the big screen starring Leonardo DiCaprio detailing his fraudulent activities as a shady stock broker.

Running a boiler room style fraud, Belford and his team ripped off customers of millions of dollars with shady investments.

Known as "The Wolf of Wall Street", Belfort was eventually caught and jailed in 1999 after pleading guilty to multiple crimes.

Larson, 60, spent 10 years in prison after he was convicted of dealing cocaine and reportedly was distributing it across different states.

He told the media: "It's the ultimate dream for me to caddie at a Ryder Cup in Wisconsin not far from where I grew up.

"It has been an interesting life, and I've thought about writing a book.

"But who in the hell wants to read a book about a guy who's been to prison?"

His illegal activities reportedly started on a small scale but ramped up until one of his drug suppliers ratted on him.

Because Larson had dealt over state lines, it meant the charges against him were federal and more serious.

Larson, who is nicknamed E, told the media: "I did it for monetary purposes only. I didn't use it, and never brough it out on Tour.

"Was I a major drug dealer? No. Did I drive fancy cars? No. That doesn't make it any better."

He added: "I obviously wasn’t happy with the sentence I got. I violated the law and I deserved to be penalized."

Larson's sentence was 13 years but he was let out three years early, and is honest about his past and the future.

"I just wish it could have been less time so I could have gotten on with my life," he said.

Larson has also been on the bag for Anthony Kim who rose to stardom in 2007, playing in one Ryder Cup in 2008.

Kim hasn't been seen on the PGA Tour since 2012 and is frequently the subject of news articles after his disappearance.

After Kim sacked Larson, he went on to caddie for Jeff Overton and was on the bag at the 2010 Ryder Cup at Celtic Manor in Wales.

English said he respected the story of his caddie and added: "Eric could have gone two different ways after going what he went through.

"And he chose probably the hardest way.

"That was to pick himself up and keep going and make himself something. He has obviously been through a lot in his life.

"There's nowhere I can put him on a golf course that's going to be in a worse spot than he was in 15 or so years ago."