Will Brooks Koepka and Bryson DeChambeau be paired TOGETHER at the Ryder Cup?

Padraig Harrington has warned publicly the friction between the players could make or break the United States. 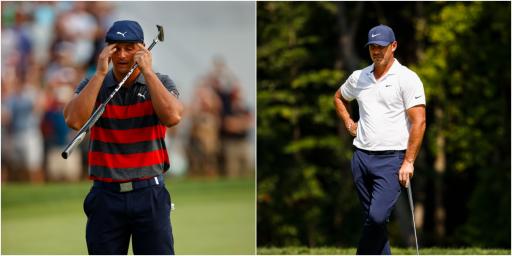 Can Steve Stricker possibly pair Brooks Koepka and Bryson DeChambeau together at the Ryder Cup?

By now Stricker in all likelihood already knows his pairs, but it is not out of the realms of possibility they are playing together.

Whether or not it's for a social media paycheque at the end of the year, the two players have traded barbs all season.

So much so the PGA Tour, rightly or wrongly, had to step in to warn spectators not to goad DeChambeau with shouts of "Brooksy".

Of course all it did was encourage some boozed-up fans to carry on yelling at DeChambeau, who turned 28 years old last week.

Padraig Harrington, Europe's captain, is all too wary of the consequences of what could happen if they were paired together.

The PGA announce a crackdown on 'rowdy' golf fans after a feud between Bryson DeChambeau and Brooks Koepka boils over.

Fans who taunt Bryson DeChambeau with "Brooksie" chants could be thrown out of PGA tournaments.

"If they get their act together and pull together, the team sees that and pulls together really strongly," Harrington told the Guardian.

"All of a sudden you get an uplift from it. That’s why I’m not relying on it.

"As a captain, I’d see it as something that could work in my favour.

"If I can get these guys to show unity, the rest of the team would follow. We can’t rely on it."

Harrington, 50, has made no secret of his issues with Sergio Garcia in the past.

The European captain has said he didn't approve of some of the anger issues Garcia has displayed in the past.

From throwing his clubs, smashing his wedges into the bunkers after a poor shot or even spitting on the greens and into the cups.

But they would be hugging during Ryder Cup weeks, he added.

There's no doubting on paper DeChambeau and Koepka could make a formidable team.

They are ranked seven and nine in the world.

NEXT PAGE: RORS AND SHANE LOWRY UNLIKELY TO BE PAIRED TOGETHER