Luke Donald has pledged his "complete loyalty" to Ryder Cup Europe if he is given the role after Henrik Stenson signed for LIV Golf. 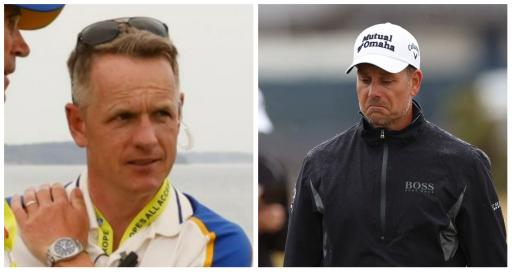 It has not been confirmed yet but it is widely expected that former World No.1 Donald will be announced as Stenson's replacement.

The Swede, 46, only spent 127 days in the role but his decision to play in the LIV Golf series meant he was stripped of the honour.

Stenson spoke to the media this week at the third LIV event at Trump National in Bedminster, New Jersey, about the fallout.

"I don't feel like I've given it up," Stenson told the media on Wednesday alongside fellow rebels Lee Westwood, Ian Poulter and Sam Horsfield.

"I made every arrangement possible here to be able to fulfil my captain's duties, and I've had great help here from LIV to be able to do that.

"And still, the decision was made that I was to be removed. I'm obviously disappointed over the situation.

"But it is what it is, and yeah, we move on from there now."

In an even more interesting twist, Stenson did not rule out a legal response.

Here's the full exchange about that:

Q. One last thing. In your statement, you said that you'll accept it "as of now." Did that mean that you could even think about a legal route or anything on this?

Henrik Stenson: "On my statement, last week, as you clearly have read, I just expect to be treated fairly going forward depending on what the outcomes are in this whole case, and that is yet to be -- yet to be seen what decisions are to be made and when we'll -- when we will be notified of anything like the boys are saying here, qualification and vice captaincies and all the rest."

More: Tiger Woods has not spoken to Bryson after he joined LIV

What did Donald say about Stenson?

Donald has given an interview to Golfweek. He has not confirmed whether he has been given the role.

He told the publication: "If I got this captaincy I would live up to my word and see it through. Let me put it that way, I wouldn't be doing a Henrik."

Donald continued: "I was surprised that [Stenson] would put his name forward if his plan was to go to LIV, which, you know, the rumours, and I hate to talk about rumours, but rumours are that he’d been in contact with the rival tours, whatever they were, and he was very interested,” Donald said.

"And I think everyone knew that, the European Tour knew that. They obviously took his word that he wasn’t going to do it. We all have to sign a clause or contract saying that we won’t have anything to do with [LIV].

"I'm disappointed I guess that he would put his name forward and then go to LIV. I understand certain guys going to LIV, in certain situations in their careers and stuff, that makes sense. But obviously something big to give up.